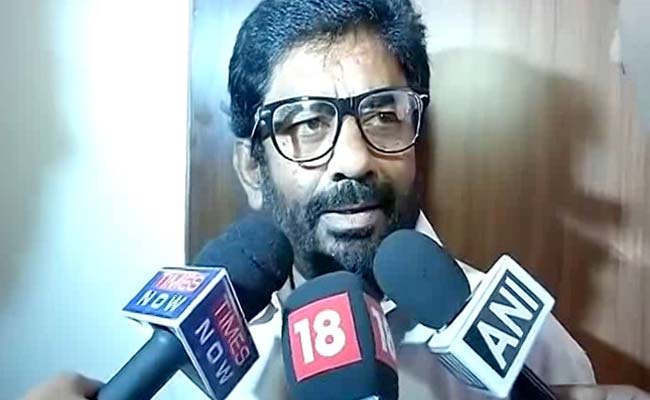 NEW DELHI :Delhi Police today registered an FIR against Shiv Sena MP Ravindra Gaikwad, who had assaulted an Air India staffer at the Delhi Airport on Thursday. Delhi crime branch will probe the case. The FIR was filed at Airport police station.

Charges under Section 355 of the Indian Penal Code (assault or criminal force with intent to dishonour person) and under Section 308 (attempt to commit culpable homicide) have been slapped against the Lok Sabha MP.

He had thrashed 61-year-old Sukumar Raman of AISATS, Air India’s ground handling firm,  with his slipper 25 times at the Delhi’s IGI airport after landing from Pune. In the meantime, Gaikwad also submitted a complaint against Air India before Delhi Police making a counter allegation that he was pushed and yelled upon.

The MP said he was made to travel by Air India on economy class even as he had a business class ticket. The airline on the other hand has said the flight was an all-economy one and had no business class seats.
Giakwad may have to travel by train or bus now as the Federation of Indian Airlines (FIA) has refused to seek an apology from the Osmanabad MP. The FIA said that it is not seeking any apology from Gaikwad as it would then mean allowing him to fly again.

Meanwhile , Ravindra Gaikwad, Shiv Sena MP, has in the last 24 hours proved to be a giant embarrassment for his party. Or so you would think. After he thrashed an Air India manager on a plane – he pleasured in detailing “I hit him 25 times with my slipper” and demanded that the 60-year-old, who he nearly pushed off the ladder used to disembark the plane, should apologize to him- the Sena decided to stand by its man.

Sanjay Raut, party leader, said that Air India “needs to introspect” and should ponder over “what would happen if the public decides to blacklist the airline” – a comeback to the national carrier and other airlines banning the MP as a passenger; first Air India and then Indigo cancelled his tickets today to return to Pune from Delhi.

Two cases have been filed by Air India against Mr Raikwad; “the law will take its own course,” said Mr Raut, making it clear that the party will not punish its offending MP. He also said the MP “was made to sit in economy class, despite booking a business seat” and that it is yet to be determined who initiated the violence.

Mr Gaikwad landed in Delhi yesterday on an Air India flight from Pune. Whereupon he refused to leave the plan for 45 minutes. His sit-in was to protest against being made to fly economy. It’s not clear what the airline could have done differently, given that the plane had no business class section, a fact that was reportedly conveyed to the politician’s staff ahead of the journey.

But Mr Gaikwad smelled in this “a conspiracy” and demanded an explanation.  So Duty Manager Sukumar Raman arrived on the jet to reason with him. Whereupon Mr Gaikwad, a former schoolteacher, hit him with his footwear and allegedly broke his glasses and ripped the buttons of his shirt.

The manager’s letter of complaint says the MP abused him, “used foul language” and humiliated him. “I can only say God save our country if this is the culture and behavior of our MPs,” says the last line of his note.
In Delhi today, Mr Raikwad met with party leader Anil Desai and updated him on what went down on the plane. He was warned to “watch his behavior”- unlikely that his wrist is smarting after that very light tap. Mr Raikwad has also asked Civil Aviation Minister Ashok Gajapathi Raju and Lok Sabha Speaker Sumitra Mahajan to investigate why he was treated poorly by the national carrier.