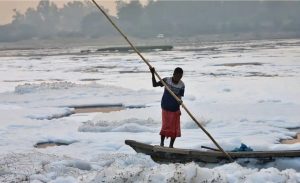 NEW DELHI : According to authorities, the Delhi government will conduct tests to determine the concentration of microplastics in the capital’s groundwater and to pinpoint pollution hotspots that cause the Yamuna to foam.
Additionally, a study will be conducted to identify any potential obstacles to the ban on single-use plastics. The three investigations, which are due to be finished within six months after the project’s assignment, will be carried out by reputable institutes chosen by the Environment Department.
One of the investigations will identify the causes and factors for the froth on the surface of the river, which indicates “deadness of the water and no dissolved oxygen in it.”
High phosphate levels in the wastewater, according to authorities, are the main cause of the poisonous foam’s creation. The main source of phosphates, according to them, is detergents used in dyeing businesses, dhobi ghats, and homes.
The river is reached by untapped drains carrying phosphate-rich wastewater from authorised colonies and communities. According to authorities, turbulence caused by the water falling from a height at a barrage stirs up the phosphoric compounds in the river, which causes froth to develop.
The government will also categorise and calculate the various single-use plastic products used in Delhi and assess their contribution to the three-year total plastic garbage creation.
IIT Guwahati plans to tie up with industry to make ecofriendly plastic products available to people Using soap on the face? Here’s why you need to stop immediately and try this instead mThe government wants to locate the key drains that contribute the most to Yamuna pollution as well as hotspots like industrial and colonial regions. The research will also make recommendations for potential substitutes for common home items that cause foaming. Around 80% of the river’s pollution is concentrated in a 22-kilometer section between Wazirabad and Okhla, which represents less than 2% of the river’s 1,370-kilometer length from Yamunotri to Allahabad.
The froth is nothing but a sign of a polluted river. According to the experts, release of untreated or poorly treated effluents could lead to the frothing. Sewage network and industrial waste also leads to toxic frothing. Giving further explanation, Sushmita Sengupta, Senior Programme Manager of the Water Programme at the Centre for Science and Environment (CSE) said phosphates present in the river causes froth. Surfactants and phosphates found in detergent in households and industrial laundry gets dumped into rivers and all the sewage is not treated, she was quoted as saying to the Indian Express.com.
Yamuna Monitoring Committee, last year in July, had asked the Delhi Pollution Control Committee (DPCC) and the Central Pollution Control Board (CPCB) to inspect and submit reports on this matter. The report submitted by the CPCB in August last year suggests that the foam formation takes place at two locations–downstream of the ITO and Okhla barrages. The water that falls after discharge from the Okhla barrage stir the foaming agents present in the water.
(With Bureau Report).