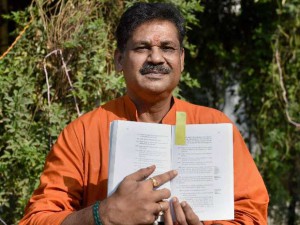 NEW DELHI: Kirti Azad has included four video recordings with his lengthy reply (three pages long) to his party, the BJP, outlining why he should not be expelled for “indiscipline” and “anti-party” activities.
Those charges were amassed by Mr Azad, a former national cricketer and MP from Bihar, for publicly accusing Finance Minister Arun Jaitley of allowing financial and other irregularities on his 13-year-watch as President of the Delhi and District Cricket Administration or DDCA.
Mr Jaitley headed the body from 1999 to 2013,  but his party says he was non-executive president and not involved with the day-to-day administration of the organization.
The BJP has launched a staunch defense of Mr Jaitley even as Mr Azad has argued that the national premier investigation agency, the CBI, should examine his allegations.
A source close to Mr Azad said that the 53-year-old in his reply has claimed that he spoke to party president Amit  Shah and “sought a meeting with Mr Jaitley to discuss issues pertaining to the DDCA”.    But because no action followed, he “assumed that the issue of corruption in the DDCA has nothing to do with the BJP.”

Mr Azad has also asked the BJP to provide him with newspaper or media reports that prove he attacked the party’s top leadership after the BJP lost the Bihar election despite a rigorous campaign led by the Prime Minister.  Mr Azad has reportedly told the party that “I had said it was incorrect to target PM and party leaders as the state leadership failed to popularise schemes of the central government in Bihar.”
The four video recordings he has delivered to his party include that of his press conference on December 20  in which he first publicly raised the allegation of corruption in the DDCA. Mr Azad held that press conference despite being asked not to by the BJP president.
The show-cause notice sent by his party to Mr Azad is standard procedure after the suspension of a leader.
BJP leader Subramanian Swamy, who had earlier questioned Mr Azad’s suspension, is said to have “vetted” the law-maker’s reply.  The party will now scrutinize Mer Azad’s explanation to determine whether he should be expelled. Mr Azad joined the BJP in 1993.
The Delhi government headed by Arvind Kejriwal has demanded the Finance Minister’s resignation and has tasked former Solicitor General Gopal Subramanium with investigating the reported corruption at the DDCA.
The BJP-led union government which agrees on virtually nothing with Mr Kejriwal’s administration has said that the Delhi government cannot order an inquiry into the cricket body formed under a central law.