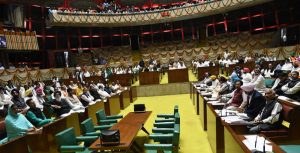 CHANDIGRAH: In the wake of Punjab Governor disallowing the Assembly session called by AAP government,  the  Bhagwant Mann government took a contortionist stance today as most of the MLAs held a demonstration close to the residence of the Governor and the Cabinet meeting called by the Chief minister decided to hold the Assembly on a revised agenda of stubble burning and power issues on September 27.
The Punjab Governor had yesterday cancelled his permission to allow the Assembly election on the issue of no-confidence motion moved by the Punjab cabinet. This had left the AAP leadership including Arvind Kejriwal and Raghav Chadha red-faced and embarrassed. It was an unprecedented situation when the Punjab Governor had to withdraw his permission to run the special session on a no-confidence move.
According to the Raj Bhawan, the purpose of the session violated the basic norms and rules of the Constitution as the call has not been given by any opposition leader or any of the ruling party MLAs either. While BJP national general secretary Tarun Chugh said that AAP was trying to build a cock and bull story under the imagined name of Operation Lotus there were clear indications of the party being in a mess..”They want to hide their failures under this name and create a deceptive impression about the BJP”, he added.