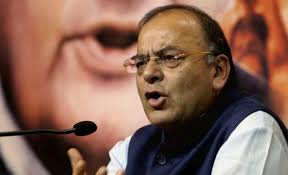 SRINAGAR: A day after having made a strong statement on tackling ceasefire violation from across the border on first day of his maiden trip to Jammu and Kashmir, Defense Minister Arun Jaitley on Sunday will visit frontier areas of the Line of Control and interact with Army officers to evaluate the security situation there.
Jaitley, who arrived in Srinagar yesterday on a two-day trip to assess the security situation of the restive region, said that Indian Army was capable enough to retort to cease-fire violations by Pakistani troops.
Jaitley’s remarks came as his first visit to Jammu and Kashmir was preceded by heavy firing from Pakistan’s side at the LoC in Jammu’s Poonch area on Friday morning. Indian forces responded ineffectively with similar calibre weapons.J&K CM Omar Abdullah had also questioned the timing of ceasefire violation, linking it to Jaitley’s arrival.
“Is it just a coincidence that the Defence Minister is visiting J&K, for his 1st visit, to review the security situation tomorrow?” Omar tweeted.
Accompanied by Indian army Chief General Bikram Singh, Jaitley is on a two-day trip to Jammu & Kashmir and today he is expected to visit the LoC’s frontier areas where he will briefed by Army officers and soldiers.The Defence Minister will also chair a unified headquarters meeting with the top brass of Indian police, Army, paramilitary forces, and intelligence agencies in attendance.
The incidences of ceasefire violations have increased in frequency from before elections and the firing at the LoC on Friday was the fourth since the new BJP-government led by Narendra Modi took over.Foreign Secretary Sujatha Singh said it has been India’s endeavour to establish peaceful and friendly relations with all neighbours, including Pakistan.
“On firing, I will like to reiterate that peace and tranquility on the border is of the highest importance in establishing the pre-condition for such peaceful and normal relationship,” she told reporters.“Maintenance of peace and tranquility on LoC is one of the most important CBMs between India and Pakistan. That remains and will remain the case,” she said. pealed for maintaining truce along Indo-Pak border.