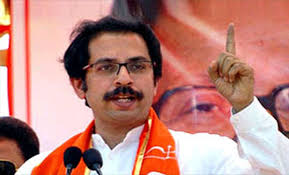 Shiv Sena chief Uddhav Thackeray is addressing the rally to be held on the Shivaji Park ground in Dadar. Sena sources said he would lay down the line for party leaders on the stance to be taken vis-à-vis the BJP.
Shiv Sena got the clearance from the Bombay High Court to hold the rally at Shivaji Park in Mumbai this year after separate applications moved by the BJP-led Maharashtra government and Shiv Sena, which also is part of the state government.
The applications were opposed by Wecom Trust and Awaz Foundation saying the noise pollution rules debar use of loud speakers in a silence zone.
The Shiv Sena was founded in 1966 at party supremo Bal Thackeray’s then Ranade Road residence, a stone’s throw from the Shivaji Park, where the party held its first public meeting. Thackeray held several public meetings there, including the annual Dusshera rallies.
The party, which has recently crossed swords with the BJP over its opposition to sporting and cultural ties with Pakistan, is caught in a cleft. It is unable to reconcile itself to the “humiliation” of losing the dominant position it held for two-and-a-half decades in the saffron alliance to the BJP but is unwilling to walk out of power.Sena sources said Uddhav, who could not disown the utterances of his party hawks, namely Rajya Sabha MP Sanjay Raut against the BJP, while staying in the government, would have to do a balancing act. The Sena hopes to enjoy power while also occupying the opposition, anti-establishment space by its frequent attacks on the BJP. It also hopes to throw up inconsistencies in the BJP’s stance on Hindutva and Pakistan and consolidate itself in the hardline Hindu constituency.