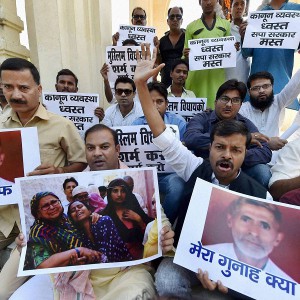 NEW DELHI: At least seven out of 10 accused, who are named in the FIR in connection with the Dadri murder case belong to the family of BJP leader Sanjay Rana, reported a leading daily

According to Indian Express report, all the residents are of Bisara village in Gautam Budh Nagar district, who are between the ages of 18 and 24.Few days ago,​ Mohammad Akhlaq was dragged out of his home and stoned to death on a village street after a public announcement from the local temple was made that the family had slaughtered a calf and eaten its meat.
While Akhlaq died, his 22-year-old son Danish is battling for life at a hospital following two brain surgeries. According to Television Channel report, the main accused Vishal, is the son of Sanjay Rana. He allegedly organised a meeting in which the mob was incited to attack the Akhlaq family.
Other accused include Saurabh, Gaurav, Sandeep, Shivam, Sachin and Vivek are from his family. The other three, Rupendra, Hari Om and Shri Om are their neighbours. Sachin and Hari Om are still absconding. The two main accused Shivam and Vishal, were arrested on Saturday.
Quoting Circle Officer Anurag Singh. the report added, “The list of 10 includes three sets of brothers — Saurav and Gaurav, Vivek and Sachin, and Shri Om and Hari Om. Expressing serious concern over the mob lynching incident, the Janata Dal (United) on Monday asked the Samajwadi Party Government in Uttar Pradesh to stop Dadri from becoming Muzaffarnagar.
Meanwhile, stirring the political cauldron, controversial BJP MLA Sangeet Som visted Dadri where he attacked Samajwadi Party government, alleging it was appeasing the minority community and innocent people were being framed for lynching of a man over beef eating rumour.
Som, who was accused of making inflammatory speeches during the 2013 Muzaffarnagar communal riots, alleged that state government was acting in a biased manner like it did during violence in western Uttar Pradesh two years ago and was shielding those who had “slaughtered cow”.
“Like they had taken the accused in Muzaffarnagar riots in a plane, they have taken those who have slaughtered cow in a plane. Even when a person is killed, they have different set of rules. Sanjay Rahul Yadav was shot in the incident, but is anyone aware. Did the government help him,” Som told reporters as the victim Ikhlaq’s family met Chief Minister Akhilesh Yadav in Lucknow.
The UP lawmaker’s remarks came even as BJP leader and Union Home Minister Rajnath Singh said the incident should not be given communal colour or politicised.