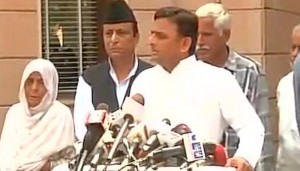 LUCKNOW: Uttar Pradesh Chief Minister Akhilesh Yadav on Sunday met the family of Mohammed Akhlaq, who was lynched by a mob, and said the government will do everything to bring the guilty to book.
Addressing the media, shortly after meeting Iqlakh’s family who had landed here yesterday night, UP CM said, “We are with Iqlakh’s family in this hour of grief. The family is in shock, we assure them all help.”“We will help them, will also provide them with job if required,” Yadav added.
Yadav also said that stern action will be taken against the accused and those attempting to spread rumours.While lashing out at the opposition parties for politicising the matter, the UP CM said that communal harmony is an integral part of nation’s culture  and added that Samajwadi Party would never do politics on matters such as these.
“We assure full support and help to the family. There are some people, who are politicising this matter. I want to assure you that the Samajwadi Party would never do politics over such matters. Communal harmony is in our culture and we must ensure that our social fabric remains intact,” he added.
Akhilesh Yadav also announces an ex-gratia of Rs 30 lakh to Iqlakh’s family and 5 lakh each to his three brothers. Meanwhile, Iqlakh’s elder brother thanked UP CM and added that they hope for a quick justice.
“We thank CM Akhilesh Yadav who supported us. We hope that justice will be done,” Iqlakh’s elder brother said.Also Read: Dadri lynching case: Sadhvi Prachi makes provocative remark, says beef-eaters deserve such fate
Akhilesh Yadav had yesterday announced an ex-gratia of Rs 20 lakh to be given to lynching victim’s family.”The CM has decided to hike the amount of financial assistance being extended to the kin of the victim from Rs 10 lakh to Rs 20 lakh,” an official spokesman had said.
The Chief Minister, during a review meeting, directed the concerned officials to take all necessary measures to bring the culprits to book and also prevent the occurrence of such an incident.
In the recent development, the Dadri police have detained Uttar Pradesh Home Guards constable Vinay and is being questioned for his alleged involvement in the case. Yesterday, the state police had arrested two main accused — Shivam and Vishal — in connection with the Dadri lynching case. The total number of accused arrested has till now gone up to 10.
A magisterial inquiry has been ordered into the incident. The incident also drew sharp reaction from various political parties.Several prominent political leaders from Congress vice-president Rahul Gandhi to Delhi Chief Minister Arvind Kejriwal have visited Dadri in the last two days to meet Iqlakh’s family.
50-year-old Mohammad Akhlaq, father of an Indian Air Force (IAF) personnel, was bludgeoned to death by a 200-strong mob in a village in Dadri in Uttar Pradesh on Delhi’s outskirts earlier this week, following rumours that he and his family had slaughtered a calf and eaten its meat as a “pre-planned murder” because of the victim’s religious persuasion. Cow slaughter is banned in Uttar Pradesh.
The victim’s 22-year-old son Danish was critically injured in the incident and is undergoing treatment.Iqlakh’s other son, Sartaj, who serves in the Indian Air Force, has demanded strict punishment for the murderers of his father.