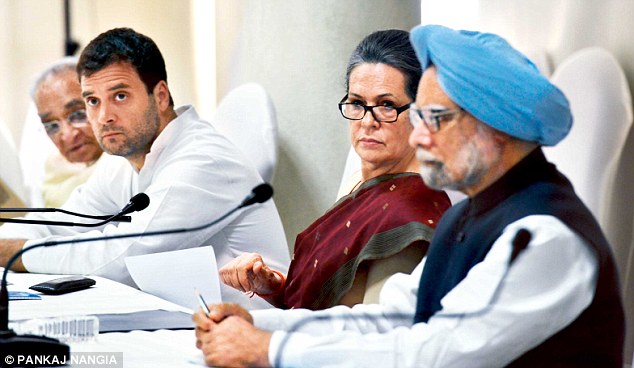 NEW DELHI : The Congress Working Committee (CWC), chaired by party president Sonia Gandhi, met in New Delhi on Tuesday to discuss the current political situation and the coming presidential poll. The meeting at Ms. Gandhi’s residence was attended by party vice president Rahul Gandhi and former Prime Minister Manmohan Singh.
Top leaders Ghulam Nabi Azad, P. Chidambaram, Ambika Soni, Janardan Dwiwedi and other CWC members were present.The leaders are likely to discuss the current political situation in the country and the issue of forging a larger Opposition unity.Senior CWC members are likely to discuss the issue of cow vigilantism and the economic situation, sources in the party said, adding that the CWC was expected to ratify the schedule for organisational polls.According to the schedule, the next Congress president has to be elected by October 15.
The Congress wants a broad coalition of Opposition parties in place ahead of the 2019 Lok Sabha elections to take on the BJP. The BJP and its allies have gained in strength since the Modi government was formed in May 2014.In November 7 last, CWC members unanimously expressed “strong sentiment” for Mr. Gandh’s elevation for the first time and may take it up further.
At that meeting, all members, including Dr. Singh and senior leader A.K. Antony, made a strong pitch for Mr. Gandhi to take over the reins of the party. Ms. Sonia Gandhi has created a record by being at the helm of the 130-year-old organisation for nearly two decades since late Sitaram Kesri’s ouster by the CWC in early 1998.Mr. Rahul Gandhi was appointed vice president in January 2013 at the Congress’s brainstorming session in Jaipur.
The CWC had then made a strong pitch for appointing Rahul Gandhi as Congress chief in order to revive the fortunes of the party.At the November 7 meeting, all members, including former prime minister Dr Manmohan Singh and senior leader A K Antony, had made a strong pitch for Rahul Gandhi to take over the reins of the party.
This is the top panel’s first meeting after the Congress was washed out in Uttar Pradesh and Uttarakhand in the assembly elections. Apart from another round of introspection, Gandhi had concluded that structural and organisational changes were required to revive the party.The party has to complete internal elections by this year-end.  Since the CWC does have powers to appoint party chief, Rahul Gandhi is keen on getting appointed as Congress chief democratically.