AHMEDABAD: To anyone familiar with the quagmire that typically engulfs large building projects in India, the reconstruction of the Sabarmati riverfront – championed for the last decade by Narendra Modi, the leader here in the state of Gujarat – is a startling sight. Slum neighborhoods have been bulldozed off the riverbank, leaving behind vacant land to be sold to developers. A broad, modernist concrete promenade extends in either direction. And the seasonal droughts that left the Sabarmati dry for much of the year? Those, too, have been taken care of, by rerouting torrents of water from a nearby canal. 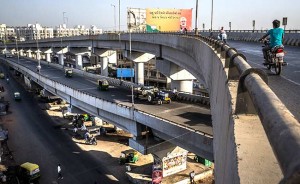 To admirers of Modi, currently the front-runner in the race for prime minister, few things recommend him more than his ability to push through the projects he supports, brushing aside the political and regulatory blockages that stall infrastructure improvements and factory construction in other parts of India.
To a country that once flirted with growth rates that rivaled China’s but has slipped into the doldrums, Modi is promising an economic jump start, pointing to his record in Gujarat as proof that he can deliver. Gujarat’s economy has grown 10 percent a year, higher than the Indian average, for much of the last decade.
But an examination of some of Modi’s methods in Gujarat suggests that his successes owe much to his personal power, which is amplified by a federal system that puts land use in the hands of state leaders rather than the prime minister. Among his projects are some that show little understanding of market conditions, relying heavily on government allocations. And some in Gujarat question whether his penchant for grand, earth-moving building projects makes sense when the state is still struggling with social problems like infant mortality and malnutrition.
Still, Modi’s record as a builder has done much to shape his image. His political life began under a shadow when, months after he took office as chief minister in 2001, religious riots broke out in Gujarat. More than 1,000 people died, most of them Muslims. Blamed by many for failing to take steps to stop the violence, Modi turned to development to create a new public persona. Business leaders warmed to him quickly, in large part because he took care of them.