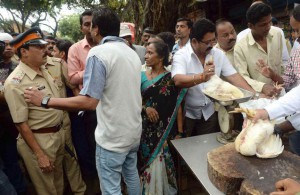 SRINAGAR: The Jammu and Kashmir High Court’s direction to enforce the 83-year-old cow-slaughter ban evoked sharp reactions in the State on Thursday. Prompting calls for mass cow slaughter on Eid to shutdowns, the directive has put the volatile State on the edge again.
Hearing a public interest litigation (PIL) petition, the court on Wednesday directed enforcement of the ban on the sale of beef across the State.According to a 1932 ruling documented under Section 298-A and 298-B of the Ranbir Penal Code (RPC), cow slaughter was banned during the Maharaja’s times and has been respected since then.
The majority of Muslims in the State, to respect the sensibilities of other religions, have voluntarily been consuming less beef than in other Muslim-dominated areas of the country. Srinagar consumes a negligible amount of beef and prefers mutton, with no cow slaughterhouses within the municipal limits.
A Division Bench, comprising Justice Dhiraj Singh Thakur and Justice Janak Raj Kotwal, directed the Director-General of Police “to ensure that appropriate directions were given to all SSPs, SPs and SHOs of all districts and Police Stations in Jammu and Kashmir that there shall be no sale of beef across the State.”
The J&K High Court Bar Association decided to challenge Section 298A and B of the Ranbir Penal Code, banning the sale of beef. Both separatist and mainstream parties reacted sharply to the court direction. The separatists are organising a shutdown and protests on Friday and Saturday in the State.
Mutahida Majlis Ulama chairman Mirwaiz Umar Farooq called an emergency meeting of 17 religious groups to discuss the issue. “The government, the administration and the judiciary are unnecessarily intervening in the religious affairs of Muslim-majority Jammu and Kashmir, which causes resentment and displeasure among the masses,” a joint statement said.
“It is a politically motivated direction that may have the worst implications in Jammu and Kashmir. It is an eye opener for those who propagate India as being a so-called secular and democratic state,” said JKLF chief Yasin Malik, who has called a shutdown on Saturday.
Syed Ali Geelani, heading a faction of the Hurriyat, called a shutdown, while describing the court direction as “motivated to create communal tension.”
Interestingly, the ruling Peoples Democratic Party (PDP) spokesman Mehboob Beigh has also criticised the court direction. “Nobody has a right to dictate what people should eat. Ban on the sale of beef in Kashmir was in vogue during the Maharaja’s times. It is an irony that despite being a Muslim-majority State, this ban was in place. The court order, reiterating the ban is debatable.”

The Ranbir Penal Code, 1932, bans slaughter of bovine animals in the State. Violation of the law can attract imprisonment of up to 10 years and fine up to five times the price of the slaughtered animal.