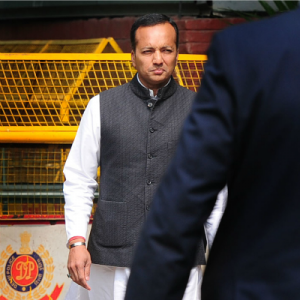 NEW DELHI: A Special Court today rapped CBI for not impounding the passport of Congress leader and industrialist Naveen Jindal, chargesheeted along with 14 others in a coal block allocation scam case, saying the agency cannot adopt a different policy for some of the accused.
Special CBI Judge Bharat Parashar also asked the CBI Director to ensure that a uniform policy is laid down for seizure of passports of accused during the probe in the case.
“It is clear that while a uniform policy which appears to have been adopted by CBI is that passports of all accused are seized by them whenever a case is registered, but in the present case a different policy was adopted for the reasons best known to them,” the judge observed.
During the hearing, senior public prosecutor V K Sharma told the court that it was decided in CBI’s office that passport of Naveen Jindal will not be seized during the probe.
The investigating officer told the court that a notice was issued to Jindal to submit his passport before the CBI but after taking some time he gave a coloured copy of his passport to the agency with a request that his passport be not seized.
To this, the court said, “CBI Director is directed to ensure that a uniform policy is laid down to be followed in all cases in future so that precious time of this court is not wasted.”
During the hearing, the agency said that out of the 10 individual accused, charge sheeted in the case, passports of two accused– Suresh Singhal and Rajeev Jain– were seized.
Court has now fixed the matter for May 6 for considering the CBI charge sheet filed in the case yesterday against Jindal, former Minister of State for Coal Dasari Narayan Rao, former Jharkhand Chief Minister Madhu Koda and 12 others in connection with Amarkonda Murgadangal coal block allocation scam case.

Besides them, former Coal Secretary H C Gupta and five firms, including Jindal Steel and Power Ltd and Jindal Realty Pvt Ltd, were also chargesheeted in the case for alleged offences under sections 120-B (criminal conspiracy) read with 420 (cheating) of IPC and under provisions of the Prevention of Corruption Act.

The case pertains to alleged irregularities in allocation of Amarkonda Murgadangal coal block in Jharkhand’s Birbhum district in 2008 to Jindal Group firms– Jindal Steel and Power Ltd (JSPL) and Gagan Sponge Iron Pvt Ltd (GSIPL).”
Six other individuals named as accused in the CBI charge sheet are — Gyan Swaroop Garg, Suresh Singhal, Rajeev Jain, Girish Kumar Suneja, R K Saraf and K Ramakrishna Prasad.
The firms chargesheeted in the case are — JSPL, Jindal Realty Pvt Ltd, Gagan Infraenergy Ltd, New Delhi Exim Pvt Ltd and Soubhagya Media Ltd.The agency alleged in the charge sheet that Jindal group firms had misrepresented facts to acquire the coal block in 2008.
In its FIR lodged in the case, CBI had alleged that Jindal group was shown favour by the Jharkhand Government which had dropped other firms from its recommendation for allocation of coal block in the state in 2007.
The FIR was categorical that Ministry of Power was against the proposal for allocating the coal block to JSPL and GSIPL.
In its FIR, the agency had alleged that, “Enquiry further revealed that Government of Jharkhand vide its letter dated June 20, 2007 recommended allocation of Amarkonda Murgadangal coal block to three companies namely (1) M/s Lanco Infratech Ltd (40 per cent), (2) M/s JSPL (30 per cent) and (3) M/s GSIPL (30 per cent).

“However vide its letter dated July 30, 2007, Government of Jharkhand changed its recommendation and recommended the allocation of Amarkonda Murgadangal block to only the two Naveen Jindal Group companies i.E. JSPL (70 per cent) and M/s GSIPL (30 per cent),” the FIR had said.CBI had alleged that both JSPL and GSIPL misrepresented facts in its application/feed back form on the count of their preparedness in setting up their proposed end use plant as well the previous allocation of coal blocks to their group companies.
Regarding Rao, CBI had claimed that in order to influence the decision of the Screening Committee in favour of JSPL and GSIPL, the then Minister of State for Coal had written a note on July 27, 2007 to the Coal Secretary, who was also Chairman of the Screening Committee.
It had said that JSPL had submitted its application for coal block allocation in January 2007 to the Coal Ministry for securing few blocks earmarked for power sector, including Amarkonda Murgadangal coal block in Jharkhand for its proposed 1000 MW captive power plant to be set up at Patratu.
GSIPL had also submitted its application dated January 10, 2007 to the ministry for its 1000 MW independent power plant in Dumka district in Jharkhand, the CBI said, adding that the allocation letter was issued to the two firms on January 17, 2008, the agency had claimed in its FIR.
Rao, a former Congress Rajya Sabha MP, held position of Minister of State for Coal between 2004-06 and between 2006 and 2008.