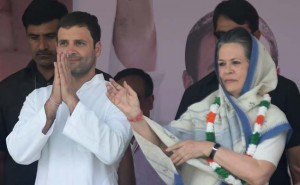 NEW DELHI: The opposition Congress will today carpet bomb the ruling BJP with 24 press conferences across the country, as it builds a counter-campaign against the Narendra Modi government, which is planning a mega celebration to mark one year in office.
From now till May 26, the first anniversary of the Modi government being sworn in, the opposition party plans 100 pressers where party spokespersons will attempt to discredit the BJP-led coalition government at the Centre.Today’s 24 pressers will see Congress leaders travel to cities like Chennai, where Milind Deora will speak, and Srinagar where veteran Shakeel Ahmed will attack the central government.
Congress vice president Rahul Gandhi has set the pace for the Congress offensive ever since he returned from a two-month sabbatical abroad. In a new, aggressive avatar, the 44-year-old, billed to take over as Congress chief soon, has launched almost daily attacks on the BJP and particularly Prime Minister Narendra Modi.
On Tuesday, as the PM was flying home after a three-nation tour, the Congress’ Kapil Sibal criticised him for his remarks in speeches he made in China and South Korea.
The Prime Minister had said in Seoul, South Korea, “There was a time when people used to say we don’t know what sins we committed in our past life that we were born in Hindustan. Is this any country, is this any government…we will leave. There was a time when people used to leave, businessmen used to say we can’t do business here. These people are ready to come back. The mood has changed.”  He had made similar comments in Shanghai, and has faced a backlash on social media.
“We are really pained over the remarks as no leader in independent India has ever made such a statement”, Mr Sibal, a former Union Minister said yesterday, also criticising the PM’s decision to grant the facility of e-visas to Chinese tourists.The anniversary that the BJP is celebrating also marks a year of the Congress’ worst performance in national elections ever. It was reduced to a humiliating 44 seats in Parliament, a number that does not even qualify it for a Leader of Opposition.
In assembly elections held since, the party has lost states that it ruled for years and Mr Gandhi’s recent efforts are seen as attempts to pull his party out of the morass.