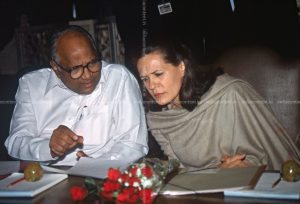 NEW DELHI : The Congress is pushing for joint opposition candidate for the upcoming presidential elections. The party has conveyed its support to Sharad Pawar to its allies whereever the party is in the government.Senior Congress leader Mallikarjun Kharge met Sharad Pawar last Thursday, with a message from party chief Sonia Gandhi. The two leaders met in Mumbai.
The Congress is in full support if Sharad Pawar throws his hat in the ring while Mamata Banerjee has called a meeting of the opposition parties on June 15. On the same day Pawar will be meeting leaders of like minded parties. However Pawar has not responded to the suggestions till now.

The Congress will attend a meeting called by West Bengal Chief Minister Mamata Banerjee in Delhi on Wednesday, to discuss opposition strategy for the Presidential polls scheduled next month. Senior leaders Mallikarjuna Kharge, Jairam Ramesh and Randeep Singh Surjewala will represent the Congress at the meeting called by the Trinamool Congress leader, it is learnt.

Congress President Sonia Gandhi reached out to the NCP chief and West Bengal Chief Minister Mamata Banerjee and other opposition leaders over the upcoming Presidential election.She talked to various opposition leaders on Saturday. “Congress President Sonia Gandhi had reached out and deliberated the issue of the upcoming Presidential election with Sharad Pawar, Mamata Banerjee and some other opposition leaders,” said a statement from the Congress.
“As per her discussions with other opposition leaders, she deputed the LoP Mallikarjun Kharge to co-ordinate with other leaders in view of her ill health owing to Covid-19,” the statement added. The statement said that the Congress is of the opinion that the country needs a President who can protect the Constitution, democratic institutions and citizens from the ongoing onslaught by the ruling BJP.
While the party has not suggested a particular name for the presidential polls, it said it owes it to people to elect a President who can apply a ‘healing touch’ to India’s “fractured social fabric”.
As for likely consensus so far, over the past two days there were hints that Nationalist Congress Party Sharad Pawar is one of the prospective candidates. Mr Pawar has, however, told his party that he is not in the race, sources have told Newstrack24x7.com  He will attend Wednesday’s opposition meeting. President Ram Nath Kovind’s term ends on July 24. Elections will be held on July 18 for the next President of India and counting, if required, three days later. The ruling coalition led by BJP does not have the numbers for a sure-shot victory.

In 2017, the BJP-led National Democratic Alliance (NDA) had the support of the Telangana Rashtra Samiti (TRS) of K Chandrashekhar Rao, the YSR Congress of Jagan Reddy and the BJD of Odisha Chief Minister Naveen Patnaik for Mr Kovind. This time, Telangana Chief Minister Chandrashekhar Rao, or KCR, is part of efforts to gather opposition forces to take on the BJP jointly.
The presidential polls are based on an electoral college comprising votes of MLAs and MPs. Vote value of each MLA depends on the population of a state and the number of assembly seats. The total strength of the electoral college, thus, is 10,86,431. A candidate with more than 50 per cent votes wins. The NDA is 13,000 votes short.