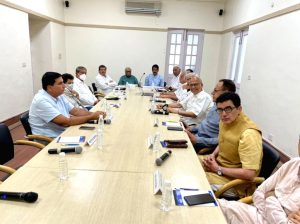 NEW DELHI : Ending speculation, the Congress on Sunday announced that elections for its president will be held on October 17 with the winner being declared two days later, asserting that it is the only party in the country which undertakes such a democratic exercise.
The party, which last held the election for the post in November 2000, has often faced criticism from the BJP over dynastic politics due to the control of the Gandhi family over its affairs. Sonia Gandhi is the longest serving party president and has been at the helm since 1998 barring a two-year period between 2017-19 when Rahul Gandhi took over,
.The schedule of the election was approved unanimously at an online meeting of the Congress Working Committee (CWC) which took place amid a fresh upheaval in the party due to the shock resignation of veteran letter Ghulam Nabi Azad on Friday and his stinging letter to the party president in which he lashed out at Rahul Gandhi for “demolishing the party’s entire consultative mechanism”. Azad was part of the group of 23 dissident leaders who had written to Sonia Gandhi in 2020 seeking large-scale reforms, including elections at all levels of the organisation.Congress President Sonia Gandhi, who has joined virtually as she is travelling abroad for health checkups, presided over the CWC meeting.

The meeting comes days after an explosive resignation letter by the party’s G-23 dissident and former veteran Ghulam Nabi Azad blasting Rahul Gandhi for “childish behaviour”, “glaring immaturity” and for letting a “coterie of inexperienced sycophants” run the party. In his letter, addressed to party president Sonia Gandhi, he also lashed out at Rahul Gandhi for “demolishing the party’s entire consultative mechanism”.

The election will be notified on September 22 and candidates can withdraw their nominations by October 8. The online CWC meeting was presided over by Sonia Gandhi, who is abroad for medical checkups. She was seen flanked by former party chief Rahul Gandhi and Priyanka Gandhi Vadra, who are accompanying her abroad. The notification for the election will be issued on September 22, while the filing of nomination would begin on September 24 and continue till September 30, the party’s central election authority chairman Madhusudan Mistry told reporters after a nearly 30-minute meeting of the CWC.
The date of scrutiny of the nomination papers would be October 1, while the last date of withdrawal of nominations would be October 8. The election, if there is more than one candidate, will take place on October 17, while counting of votes, if necessary, and the counting of votes and the declaration of results would be on October 19, Mistry said.
Crucial Congress Working Committee Meet Today Amid Turmoil Over Azad’s Shock Exit | Key Agenda, Details Here ‘Will Force Rahul Gandhi to Become Congress Chief,’ Says Mallikarjun Kharge”The election schedule that was put forward by Mistry, all CWC members unanimously approved it without raising any questions or demanding an extension of dates,” the party’s General Secretary Jairam Ramesh said. The Congress had announced in October last year that the election of the new party president will be held between August 21 and September 20 this year.

Sources had said earlier said that the election of the Congress president is likely to be delayed by a few weeks with the party focused on the Kanyakumari to Kashmir ‘Bharat Jodo Yatra’ starting September 7 and some state units not completing formalities The meeting of CWC took place just two days after Azad’s resignation. The Congress, dealing with the fallout of a series of high-profile exits, including that of Kapil Sibal and Ashwani Kumar, has attempted to deflect the latest blow by alleging that Azad’s DNA had been “Modi-fied” and linking his resignation to the end of his Rajya Sabha tenure.
Among those present at the meeting were Anand Sharma, who was part of the G-23, former prime minister Manmohan Singh, party’s central election authority chairman Madhusudan Mistry, K C Venugopal, former union ministers Jairam Ramesh, Mukul Wasnik and P Chidambaram and Rajasthan Chief Minister Ashok Gehlot along with his Chhattisgarh counterpart Bhupesh Baghel. The meeting comes amid several leaders, including Gehlot, having publicly exhorted Rahul Gandhi to return as the party chief. However, uncertainty and suspense continue on the issue. Several party insiders say Rahul Gandhi is persisting with his stance that he will not be the AICC president.
Former Maharashtra chief minister Prithviraj Chavan on Sunday cautioned that the Congress will not survive if someone is made a “puppet president”.On the discussions related to the names of Gehlot and some other leaders for the post of Congress president, Chavan asked if the president’s name will be decided before the election. “Why are you taking the reverse path? You will confirm the name in advance and then conduct elections, does this ever happen? Hold elections, whoever has to fight, will fight,” said the Congress leader who is part of the G-23.

“If backseat driving continues by making a puppet president, then the party will not be able to survive,” he warned. Gehlot’s meeting with Sonia Gandhi triggered the buzz that the two may have discussed the possibility of him being the next party president.

Rahul Gandhi had resigned as Congress president after the party suffered its second consecutive defeat in parliamentary elections in 2019. Sonia Gandhi who took over the reins of the party again as interim president had also offered to quit in August 2020 after an open revolt by a section of leaders, referred to as G-23, but the CWC had urged her to continue.In the last election in 2000, Jitendra Prasada had lost to Sonia Gandhi. Before that Sitaram Kesri had defeated Sharad Pawar and Rajesh Pilot in 1997.
(With Agency Inputs).