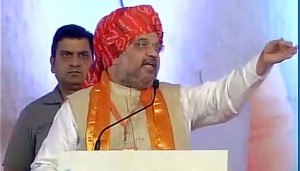 NEW DELHI: Launching a scathing attack on Congress party and its vice-president Rahul Gandhi on the JNU row, BJP chief Amit Shah on Saturday said that Congress should be ashamed of supporting ‘anti-nationals’.
While addressing a speaking at the national convention of Bhartiya Janta Yuva Morcha (BJYM) in Mathura, Amit Shah said that it is unfortunate that anti-national elements are being portrayed as ‘patriots’.
“A strange atmosphere has been created. Anti-national slogans are being projected as freedom of expression… Congress should be ashamed that its vice president goes to the campus and says these (slogans) should be heard as there is freedom of expression,” said Amit Shah.
Shah asked party workers to work hard to ensure that it remains in power at the Centre for 25 years so that India could become the ‘vishwaguru’ as it was not possible in five years.
“In five years there could be development and high growth rate and borders could be made safe but if India has to be ‘vishwaguru’, then it is a must that BJP is in government for 25 years,” he said.

Underlining party’s Hindutva credentials, he said Prime Minister Narendra Modi attended Ganga aarti with pride and went to Pashupati Nath temple in Nepal to seek blessing.The party wants India to have top IT and MBA professionals, who also seek their “inspiration” from Swami Vivekananda, he said.

“He would read from two pages he carried with him which were written in English. At times, he would read the speech meant for Thailand in Malaysia and the one for Malaysia in Thailand… Modiji spoke in Hindi in the UN and the whole country felt proud,” Shah said.
The biggest work the Modi government has done is to make the country’s borders safe, he claimed.Invoking a number of Centre’s schemes aimed at welfare of youth and farmers, he said the government has made a beginning for “miraculous” change in the country.