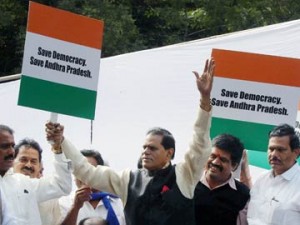 NEW DELHI : In a huge embarrassment for the ruling Congress, its own MPs from Seemandhra have given notice for a non-confidence motion against Prime Minister Manmohan Singh over the plan to split Andhra Pradesh to create a separate Telangana state. This evening, the union cabinet will review the controversial proposal amid protests by politicians on both sides of the divide.
Here are the top 10 developments related to Telangana Controversy …
Besides Congress MPs from Seemandhra, or the non-Telangana region that is opposed to bifurcation, members of Chandrababu Naidu’s Telugu Desam Party have also submitted notice for a no-confidence motion. Mr Naidu met Narendra Modi, BJP’s prime ministerial candidate, last night.
Parliament met on Wednesday for its final session before the national election and witnessed angry, loud and persistent disruptions over the plans to create Telangana.
Lawmakers from the state are expected to disrupt both Houses today as well.
The union government has said Telangana, one of the three regions of Andhra Pradesh, will be made India’s 29th state. The other two regions, referred to as “Seemandhra” are virulently opposed to this and their representatives say they will fight the move.
Andhra Pradesh Chief Minister Kiran Kumar Reddy is making desperate efforts the scuttle the bill. He sat on a dharna at Delhi’s Jantar Mantar and then met the President yesterday to request him to “use his powers” to stop the bifurcation of his state. The move, he contends, has not been well thought through
Last week, Mr Reddy led an initiative that resulted in the Andhra Pradesh state legislature rejecting the Telangana bill that the Centre wants to push through Parliament. The Assembly sent back the bill seeking more than 9000 changes. The Andhra Pradesh Assembly’s opinion is not binding on the Centre.
The Congress’ central leadership wants Parliament to debate and vote on the bill in the current session so that it can make electoral gains in Telangana in the national election due by May. But state leaders from the Congress, including Kiran Kumar Reddy, say they will be punished by voters if the state is split.
Most leaders from the state, both pro and anti-bifurcation, are camped in the Capital. Yesterday, supporters of both sides of the political divide clashed outside Andhra Bhawan, the state’s guest house in the capital
Once the Cabinet approves the bill, it will be sent to the President for his assent and then will be voted on in Parliament. A ministerial panel had earlier this week cleared the draft legislation, called the Andhra Pradesh Reorganisation Bill, after minor changes.
For the Telangana plan to be cleared by Parliament, the main opposition party, the BJP, must back it. “The chief minister himself is openly opposing his party. We are in support of Telangana,” said the party’s Ravi Shankar Prasad but added that the concerns of people from Seemandhra must be addressed.
With the Centre determined to pass the bill in this session, union ministers from Seemandhra like M M Pallam Raju and V Kishore Chandra Deo have suggested that Hyderabad, the thriving IT nerve centre of Andhra Pradesh be made a Union Territory instead of being included in either side when the state is split. They suggest its revenue can be shared.