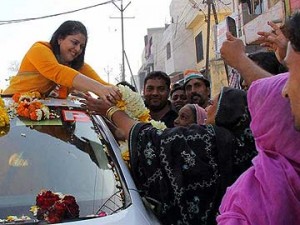 NEW DELHI : The Congress has asked the Election Commission to provide more security to actor-turned-politician Nagma, the party’s candidate in Uttar Pradesh. She has complained of harassment and unruly crowds while campaigning.In a letter to the Election Commission, the Congress has said that the “crowds she is attracting require special attention of the local administration to maintain order.” Nagma is contesting the general election from Meerut.
The Congress is, however, yet to take action against its own legislator caught on camera manhandling Nagma at an event two weeks ago. Gajraj Singh grabbed her face and allegedly kissed her on the cheek in visuals that went viral online and were repeatedly shown on TV. Nagma was seen removing his hand and walking off angrily, without addressing the crowd.The 39-year-old actor reportedly hired bouncers and guards after the incident.
Two weeks on, the Congress has neither reported the legislator, nor punished him. This has spurred allegations that the party does not want to risk any trouble from a legislator who claims a strong following and can damage its chances of winning in Meerut.Nagma, too, denied the incident later. A Congress leader who did come out in her support, was punished instead. Pramod Katyan was reportedly expelled just after he publicly criticised Gajraj Singh.Days later, Nagma suffered similar harassment at another public meeting. Last Friday, she slapped a man who allegedly groped her when an unruly crowd was pushing at her.