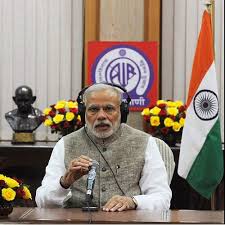 NEW DELHI: Prime Minister Narendra Modi’s radio speeches, titled Mann Ki Baat, should be banned till the elections in Bihar are completed, the opposition Congress has said, a request that is unlikely to find favour with the Election Commission, said sources.

The opposition claims that the PM can use the Sunday programmes on state-run All India Radio to unfair advantage for his party by highlighting achievements or making promises that could influence voters in Bihar.
Mr Modi, 64, is leading the campaign for his party, the Bharatiya Janata Party, and its allies, with large rallies in the state which starts voting next month.
The BJP and its partners hope to defeat Nitish Kumar, who is running for a third term as Chief Minister, and has teamed with the Congress and regional powerhouse Lalu Yadav. After five days of voting spread across nearly a month, results will be counted on November 8.
Election officials say that the same allegation about the PM’s radio addresses was examined during recent elections in Delhi and Maharashtra, with the conclusion that the speeches on state-run radio are intended for a nationwide audience.
Sources in the Election Commission said that they will act if parts of the Mann Ki Baat lectures appear to be lobbying for the Bihar election.The PM began his radio addresses in October last year to get his message across to two-thirds of the country which lives in rural India and does not have access to television.
Written simply but arrestingly, they allow him to connect directly with the common man, and showcase his personalized  style of leadership. Mr Modi has used his speeches to bring focus to uncomfortable issues like drug abuse and sanitation problems that past governments have often avoided.
To lend some interactivity to the sessions, the PM cites questions and suggestions sent to him by people from across the country,  delighting those he quotes by naming them.
Calling the Congress’ demand to temporarily stop the show “laughable”, BJP lawmaker Meenakshi Lekhi said: “Mann ki baat is a non-political platform. It inspires people to work on issues such as road accidents and dengue.”