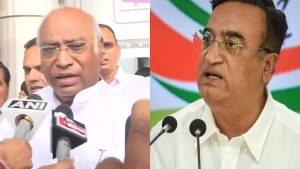 ongress observers on Tuesday submitted their report on the political crisis in Rajasthan to party chief Sonia Gandhi, pointing out ‘gross indiscipline’ by party MLAs who organised a parallel meeting a day earlier. The report also recommended disciplinary action against 3 party leaders including ministers and the chief whip, sources said.

The rebellion of Ashok Gehlot supporters has queered the pitch for Congress presidential election with the Rajasthan Chief Minister appeared to have earned the displeasure of the High Command, as the party on Monday dangled the disciplinary sword after MLAs refused to attend Legislature Party meeting by holding a “parallel” deliberations and insisting on three “demands with strings” to be put on a resolution.
Kharge emerging as top choice for Congress president
Leader of Opposition in Rajya Sabha Mallikarjun Kharge is said to have emerged top choice for the party President’s post but the game is still on and Congress sources on Tuesday said that leaders have been called for the nomination on Thursday.
Congress sources said that Rajasthan Chief Minister Ashok Gehlot is not yet ruled out from the race and Kumari Selja’s name is also under consideration while Rahul Gandhi’s choice is said to be K.C. Venugopal. Congress treasurer Pawan Kumar Bansal has taken a nomination form from the Central Election Authority, but sources said however it’s not clear whether he will file a nomination or not. On his part, Bansal said he is only a proposer, not the candidate.
Meanwhile, CM Ashok Gehlot on Tuesday held a meeting with some ministers and party MLAs in Jaipur. He also held a telephonic conversation with party interim president Sonia Gandhi. The decision on Rajasthan CM’s position will be likely taken after Congress Presidential Elections next month, sources told Newstarack24x7.com Meanwhile, Congress sources have said that no disciplinary action will be taken against CM Ashok Gehlot as of now. Gehlot conveyed to the party’s high command that his MLAs have stopped listening to him and they didn’t keep him in loop.

Congress sources also said that Ashok Gehlot is being ruled out from the Congress’ president post and it is likely that Kumari Selja could be considered for the top post while Rahul Gandhi’s choice is said to be KC Venugopal, according to a report in IANS. However, no final decision has been made yet and Senior Congress leader Kamal Nath who met Sonia Gandhi on Monday said that he doesn’t want to become the party president and wants to continue to work for the party in Madhya Pradesh.
Senior Congress leader Kamal Nath on Monday ruled himself out as a probable candidate for the party’s presidency even as he stepped in to troubleshoot the ongoing crisis in the party’s Rajasthan unit. Kamal Nath, known to have close ties with Rajasthan Chief Minister Ashok Gehlot, met Congress chief Sonia Gandhi at her 10 Janpath residence after she held a more than an hour-long meeting with party observers for the state Mallikarjun Kharge and Ajay Maken.
The Congress high command had called Kamal Nath to Delhi. He is likely to play the role of a mediator and try to broker a truce in the state unit, which is reeling under a factional feud after a possible leadership change move turned into a full-blown crisis for the party. Asked if he was not interested in the post of Congress president, Kamal Nath told reporters, “I have no interest, I have come to Delhi for Navratri.” Earlier, Kharge and Maken briefed Gandhi regarding the developments in Rajasthan and will submit a written report about the crisis in the party’s state unit by tonight or tomorrow. They had met the party MLAs in the state to get a sense of the ground situation.

According to Maken, MLAs loyal to Gehlot have put forth demands, including that a decision on the chief ministerial face should be taken after the party president election on October 19 and in consultation with Gehlot. Talking to reporters, AICC in-charge for Rajasthan Maken said the Congress Legislature Party (CLP) meeting was organised with the consent of Rajasthan Chief Minister Ashok Gehlot, and termed the act of the MLAs loyal to him holding a parallel meeting as “indiscipline”.