PATHANKOT: Actor-turned-BJP candidate from the Gurdaspur constituency Vinod Khanna on Friday launched a scathing attack on the Congress party, saying it does not even deserve to sit in the opposition on account of various scams.“The Congress deserves to be wiped out totally. It has no right to even sit in the opposition for the clear reasons that the people were fed up with its acts of omission and commission,” Khanna said, addressing a gathering here. 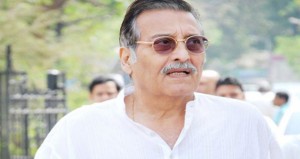 Khanna, who is pitted against Congress’s state unit chief Partap Singh Bajwa, accused the Congress leaders of being “arrogant” and having little respect for democratic values.“The nation has suffered a lot and time has come when the Congress should be shown the door. For this, the people should get united to defeat it in the Lok Sabha election,” he said.There is a complete Narendra Modi wave in the region, Khanna, a former MP, asserted.
“During the campaign, I realised that the people are aware of the work done by me in my three terms as MP for the betterment of the Gurdaspur parliamentary constituency,” he claimed.