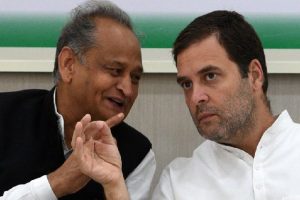 JAIPUR: Ahead of the election for the new Congress President , Rajasthan CM Ashok Gehlot  said ‘if Rahul Gandhi doesn’t become the party president it will be a disappointment for Congressmen in the country.’ “The unanimous opinion is in support of his (Rahul Gandhi) becoming the president. So, I think he should accept it. It is not about Gandhi or non-Gandhi family. It is the work of the organisation and no one is becoming a prime minister,” Ashok Gehlot said.
Gehlot  noted that the party is ‘unanimously in favour of Rahul Gandhi for president post.’ Gehlot further added that ‘considering the sentiment of party workers, Rahul Gandhi should accept the role.’ He also went on to say that  “In the last 32 years, no person from the Gandhi family became the prime minister or the union minister or the chief minister. Then why Modi ji is afraid of this family? ” Gehlot added.

The Rajasthan CM also expressed confidence that Congress will emerge victorious in the 2024 General Elections. “This time it is not an easy game for PM Modi. The way Nitish Kumar has given a blow to the BJP and Congress has cornered the Central government through protests led by Rahul Gandhi on the issues of inflation and unemployment, the Modi government has shaken,” he said.
As the countdown began for the election of Congress president, Ashok Gehlot on Monday said the party is “unanimously” in favour of Rahul Gandhi for the post. The party’s election authority has said it will stick to the schedule of electing a new chief by September 20.
Mr Gehlot said that considering the sentiments of Congress workers across the country, Rahul Gandhi should accept the role.“If Rahul Gandhi does not become the party president, it will be a disappointment for the Congressmen in the country. Many people will sit at home and we will suffer..Even within the party, there is an opinion in favour of making Rahul Gandhi the new president.
Meanwhile, a meeting of the Rajasthan Congress Working Committee was held here on Monday. During the meet, preparations for ‘Halla Bol Maharally’ to be organized at Ramlila Maidan in Delhi on September 4 by the All India Congress Committee against rising inflation and unemployment in the country were discussed.
(With Bureau Inputs).