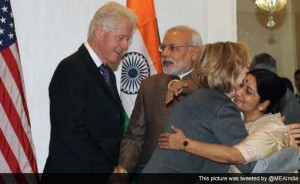 NEW YORK : Apart from the corporate captains of America, Prime Minister Narendra Modi also met former US President Bill Clinton and his wife Hillary Clinton in New York on Monday. External Affairs Minister Sushma Swaraj was also present during the 45-minute meeting.
Both the Prime Minister and Ms Swaraj warmly welcomed the Clintons and wished them on becoming grandparents. Chelsea, the daughter of the former US first couple, had given birth to a daughter, Charlotte, last week.”I am thrilled. No one had the knowledge and votes before you to build a national economy,” Mr Clinton told PM Modi.
The meeting comes in the backdrop of reports that Mrs Clinton may run for the US Presidential elections in 2016. Known for their love for India, the Clintons were expected to discuss Indo-US engagements and the priorities of the new government with the Prime Minister.
Mr Clinton, who visited India for the first time in 2000 during the tenure of Prime Minister Atal Bihari Vajpayee, had said he followed PM Modi’s career since Mr Modi was chief minister of Gujarat and was very impressed with his economic policies.
“Everybody believes that he has the potential to make a big difference based on his economic work as chief minister. We all are excited. We want this to work,” Mr Clinton had told NDTV in an interview during his visit to India in July.
The visa controversy and the debate around the 2002 riots belonged to the past, especially after the results of the general election, he had said.
Plus, Mr Modi’s decision to invite Pakistan Prime Minister Nawaz Sharif to his swearing-in ceremony could have been a signal to the Muslims in India as well that he wanted to govern for all, Mr Clinton said.Mrs Clinton, a former US Secretary of State, also agreed.
“What we all hope for is that the Prime Minister, by his actions, demonstrates unequivocally that he is the Prime Minister for all of India, every single group inside India. I think that’s his intention, and then that ends whatever lingering concerns anyone had,” Mrs Clinton had told NDTV in a separate interview.