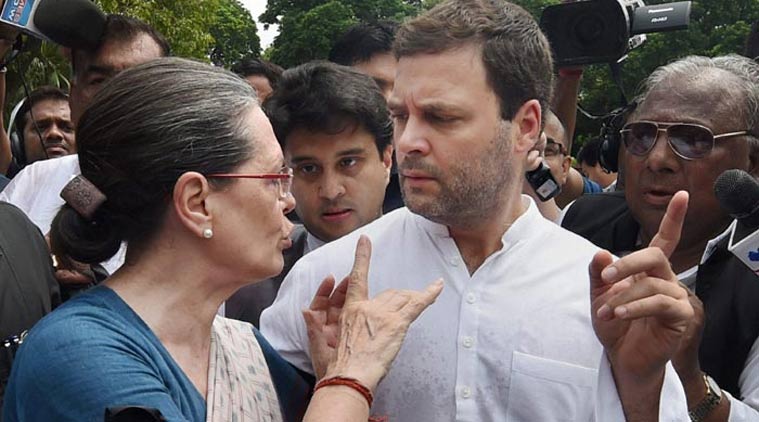 NEW DELHI : In a huge setback for the Gandhi family, the Delhi High Court on Friday cleared way for an Income Tax probe against Congress chief Sonia Gandhi and her son Rahul in connection with the alleged misappropriation of funds in the National Herald case. The company in which Sonia, Rahul Gandhi are stakeholders will be investigated by tax officials, the Delhi High Court said in its order.

The Gandhis have been accused of conspiring to “cheat and misappropriate funds” by paying just Rs 50 lakh through which Young Indian Pvt Ltd obtained the right to recover Rs 90.25 crore which Associate Journals Ltd (AJL) owed to the Congress.Congress president and her son had earlier opposed as “vague and devoid of material particulars” BJP MP Subramanian Swamy’s plea seeking summoning of witnesses in the National Herald case.
Rahul Gandhi needs to be more accessible like Sonia, spend more time at Congress HQ: Sheila DikshitThe Gandhis, who are accused in the case along with some other Congress leaders, had contended that Swamy’s plea was “in the nature of a fishing and roving enquiry which is not permissible in law”.

The submissions were made in the reply filed to Swamy’s list of witnesses and other evidence given to Metropolitan Magistrate Lovleen in the case.”The application preferred by the complainant (Swamy) is vague and devoid of material particulars and is in the nature of a fishing and roving enquiry which is not permissible in law.
“Swamy has proceeded to enlist the witnesses and enumerate a number of documents without divulging the dates or relevant period for most of the documents sought to be summoned through the said witnesses,” the written reply filed by the accused said. The court, thereafter, listed the matter for further hearing in April after Swamy sought time to go through the submissions made before arguments on the matter could begin.
The accused claimed, “Swamy, through this application, is seeking to summon witnesses and call for documents without divulging their necessity and desirability on the basis of the allegations made by him in the complaint.””The persistent attempt on the part of the complainant to have access the documents is clearly an attempt to make out a new case which is impermissible in law,” they said.

Swamy, in his private criminal complaint, has accused the Gandhis and others of conspiring to cheat and misappropriate funds by paying just Rs 50 lakh through which Young Indian Pvt Ltd (YI) obtained the right to recover Rs 90.25 crore which Associate Journals Limited (AJL) owed to the Congress.

The Gandhis and other accused – Motilal Vora, Oscar Fernandes, Suman Dubey and Sam Pitroda — have denied the allegations levelled against them.The court had summoned the accused persons, besides YI on June 26, 2014.On December 19, 2015, it had granted bail to Sonia, Rahul, Vora, Fernandes and Dubey, who had appeared before it pursuant to summons. Pitroda was granted bail on February 20, 2016 when he had appeared in the court.
With PTI inputs