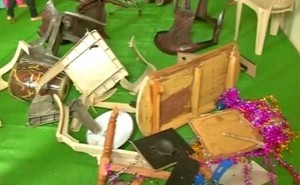 RAIPUR: Chhattisgarh: 25 men ‘beat up’ people inside church, vandalise property Eyewitnesses: Men shouted ‘Jai Shri Ram’ as they roughed up worshippersThe culprits are alleged to be Bajrang Dal activists, no arrests yet
Around 25 men entered a church in Raipur’s Kachna area today during a prayer service, allegedly beat up the people inside and vandalised the church premises.
Eyewitnesses said the men entered the church at noon, raising slogans of “Jai Shri Ram”. They roughed up the men and even beat up the women. Around 65 worshippers were present at the time.

Arjun Pannalal, president of Chhattisgarh’s Christian Forum, who filed a complaint with the police, alleged that the miscreants were activists of Bajrang Dal.The attackers, members of Bajrang Dal, were raising slogans of ‘Jai Shri Ram’, the complainant has alleged.

“They started damaging everything and tore up the women’s clothes… They also knocked down a child… When the police came, they ran away,” he told the media.
The police have registered a First Information Report, or FIR, against unknown men and have seized three motorbikes from the church premises on which, they say, the attackers had come. The police, however, have denied that any women were harmed.A hunt is on for the attackers and efforts are on to trace the owners of the seized motorbikes, the police said.