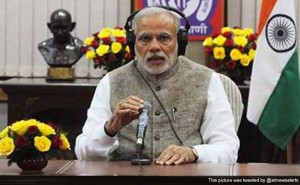 NEW DELHI: Recognizing the importance of climate in common man’s life, Prime Minister, earlier in the day, during Mann Ki Baat programme said that checking global warming is everyone’s responsibility. He said, climate change and global warming are issue of discussion and concern.
The Prime Minister referred to Noor Jehaan of Kanpur Uttar Pradesh who has set up a solar lantern plant and lends out solar lantern to housewives at 100 rupees per month.
Conveying sympathies to the people of Tamil Nadu affected by recent floods, Mr. Modi said heavy downpour and unseasonal rainfalls are also impact of global warming.
The Prime Minister said that 66 lakh people including 24 lakh women have benefited from the recently launched Pradhan Mantri MUDRA Yojana. He said, 42 lakh crore rupees have been disbursed to beneficiaries during the short span of time,adding that, most of them belong to SC, ST and OBC category.
Mr Modi said,organ donation can save lives and in a way brings immortality,adding that the government has launched a national registry of transplantation on 27th of this month for organ donors and patients waiting for transplants.
The Prime Minister appreciated the role of ASHA workers in providing health services specially in rural areas. Mr Modi hailed Jamuna Mani Singh an ASHA worker from Odisha for her fight against malaria.
Mr Modi also spoke about Ek Bahrat Shrestha Bharat scheme and asked people to come forward with more suggestions to give the programme a specific shape.