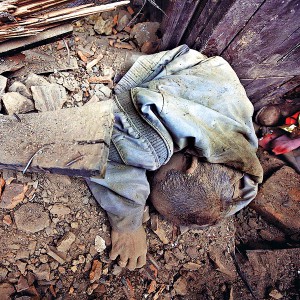 KATHMANDU: Nepalese riot police is struggling to hold back thousands of residents trying to leave Kathmandu as anger mounted at the lack of buses being laid on by the authorities.
Nepal’s Kathmandu and Sindhupalchowk districts, among the worst hit, have reported 1,039 and 1,176 deaths respectively. The situation is almost equally worrisome in Nuwakot (478), Dhading (303), Gorkha (256), Rasuwa (250), Kavre (248), Bhaktpur (243), Lalitpur (159), Dolakha (50).
Three main power sub-stations in Kathmandu have been partially restored. In a bid to help evacuees, Indian Railway Minister Suresh Prabhu said that a reservation counter has been opened at T3, Indira Gandhi International Airport in New Delhi to provide immediate rail tickets to Nepal quake survivors.
Thousands of people from Kathmandu are queuing in major outgoing points since Wednesday morning as the fear of quake still looms large.
Some shops opened this morning and vehicles were also plying on the road in Nepal. Electricity is restored after four days and telephones are working. But some essential supplies like drinking water, dry food and milk are not available in the market.
India’s Cabinet Secretary will chair a meeting of the National Crisis Management Committee at 11 am today to review rescue and relief operations in quake-hit areas.
The Indian Air Force has stepped up rescue sorties in Nepal.Defence Ministry spokesperson Sitanshu Kar said 314 evacuees arrived in India from Nepal this morning.
The United Nations is releasing USD 15 million from its emergency fund to help relief efforts while the World Food Programme said it aimed to get food aid to 1.4 million people over the next three months.
UN aid chief Valerie Amos will spend three days in Nepal from Thursday to “show solidarity with the Nepalese people, raise the visibility of the crisis and assess the response operations,” UN spokesman Farhan Haq said.
Australia said it was raising its level of aid to USD 4.7 million and sending a military plane to bring in relief supplies and evacuate stranded citizens.Nepalese official Uddav Prasad Bhattarai said 250 people were feared missing after an avalanche on Tuesday on the popular Langtang trekking route.
In Gorkha, one of the worst-hit districts, terrified residents were seen running with outstretched arms towards an Indian Army helicopter to plead for food and water.
The United Nations estimates that eight million people had been affected.
In a televised address late Tuesday, Koirala declared three days of national mourning for the 5,057 people known to have perished in Nepal alone. Around 8,000 people have been injured.
Among the dead were 18 climbers who were at Mount Everest base camp when an avalanche triggered by the quake flattened everything in its path.
As Nepal’s Prime Minister Sushil Koirala said getting help to remote areas was a “major challenge”, aid finally began reaching areas that had to fend for themselves since Saturday`s 7.8-magnitude quake.
Hungry and desperate villagers rushed towards relief helicopters in remote areas of Nepal on Tuesday, begging to be airlifted to safety, four days after a monster earthquake killed more than 5,000 people.