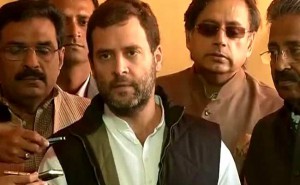 NEW DELHI: Hours before Prime Minister Narendra Modi was to travel to Kerala for his first visit since taking power, a combative Rahul Gandhi accused him of insulting the people of the state over an event from which Chief Minister Oommen Chandy has been dropped.

“PM has insulted the people of Kerala by stopping our Chief Minister from attending a function. The chief minister is the voice of the people of Kerala. This is simply not acceptable to us,” the Congress vice president said.
In Parliament, the Congress was not alone when it walked out of the Lok Sabha to protest the “Kerala insult.” It was joined by parties like the Janata Dal-United, NCP, National Conference, Rashtriya Janata Dal and the Trinamool Congress.
The Congress alleges that Mr Chandy was first invited then asked to keep away from a function in Kollam where the statue of former Congress leader R Sanker is to be inaugurated by PM Modi.
“It is not a personal insult. #Kerala was insulted when its CM was denied the right to participate in an event where the PM is attending,” Mr Chandy tweeted.
In Parliament, Home Minister Rajnath Singh denied Mr Gandhi’s allegation and said: “Who is invited or not, the prerogative is with the (organisers). They decided not to invite the Chief Minister. Our Government does not want any confrontation with any state government.”
Sources say a furious Chief Minister will convey his decision to skip the function to the prime minister when he receives him at the airport in Kochi this afternoon. PM Modi will be in Kerala for two days.
The event has been organised by the Sree Narayana Dharma Paripalana Yogam, which represents the backward Ezhava community and set up a new political party last week.

Its leader Vellapalli Natesan reportedly told Mr Chandy that “some groups” had opposed his presence at the function to honour R Sanker, a Congressman who belonged to the group and was Chief Minister.The group is expected to partner with the BJP for the state polls next year.