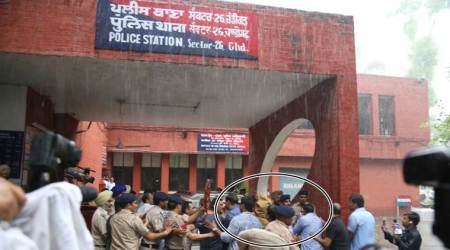 CHANDIGRAH : Vikas Barala, son of Haryana BJP chief, along with his friend, accused of chasing a woman in a car in the Chandigarh stalking case, was on Thursday arrested by Chandigarh police. They will be presented before the court on Thursday morning, police said. Vikas surrendered before the police on Wednesday afternoon, three hours after the deadline to surrender ended. The police have slapped charges of attempt to abduct under sections 365 and 511 of the Indian Penal Code. The charges carry a maximum sentence of seven years in jail.

Police had earlier booked the two accused under sections section 354 D (stalking) of IPC and 185 of the Motor Vehicle Act (driving by a drunken person or by a person under the influence of drugs). Directorate General of Police (DGP) Chandigarh, Tajender Singh Luthra, told media the harsher sections were introduced after they caught hold of concrete proof from CCTV footage and they took legal opinion.
“We called both the accused for interrogation. It was a lengthy interrogation. A number of things have come to fore in today’s interrogation. Thus we have decided to press two charges – attempt to abduction (365/511). Both shall be produced in the court on Thursday, said DGP TS Luthra addressing a press conference. “There are a number of things for which we need the accused to reconstruct the scene of crime to verify many facts.

We will do “everything under the sun” to ensure the 29-year-old complainant gets justice. Varnika Kundu, daughter of Haryana Additional Chief Secretary VS Kundu, had on Friday alleged that Vikas and his friend Ashish stalked her. Vikas Barala was on Wednesday summoned by the Chandigarh Police in connection with the stalking case. Subhash Barala has earlier said that his son would fully cooperate with the investigation. DGP Luthra earlier said Vikas Barala refused to accept the notice because of which it had to be pasted on the wall of his residence.

“They will be produced in the court on Thursday morning and we will seek custody of the accused. A lot of facts in the case still needed to be verified,” he said. Police added that the duo was arrested based on the primary interrogation and they cannot reveal more details as it could hamper the further investigation.

Barala and his friend were earlier arrested on Saturday but were released on bail. He finally joined the probe five days later on Wednesday morning, after police cancelled his bail bond and issued him the summons. The police had recovered the missing CCTV footage of five key locations in Chandigarh that showed Vikas and his friend chasing the woman in a car. This was a day after the crucial video evidence was said to be missing.

Soon after the police said that the recovered footage shows Barala chasing the woman, Haryana Subhash Barala said the police was under no pressure and claimed that the victim was “like his daughter”.The 29-year-old daughter of a top bureaucrat in the Haryana government alleged that she was followed by Vikas Barala and his friend on Friday night. Barala’s SUV pulled up close to her car several times in a bid to block her way.