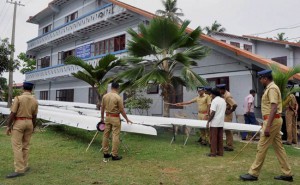 NEW DELHI:  THIRYVANANTHPURAM:The Union Sports Ministry has ordered that a medical board be set up to investigate the suicide attempt by four teenage athletes at a hostel run by the Sports Authority of India in Kerala.
The hostel, located in Alappuzha, has been temporarily closed and all residents have been sent home for a week.Two of the girls who survived are still critical. But they have been allowed to have rice water. The third is still in danger. All three girls are conscious.

The girls, all in their teens, had made a suicide pact. They signed a note accusing their seniors of harassment, before eating a toxic fruit from Cerbere Odollam, locally known as the “suicide tree,” found in the backwaters of Alapuzha.
The families have alleged that they were “humiliated and tortured” and were forced to wash their seniors’ clothes.

The senior hostellers have denied that there had been any harassment or ragging.
The hostel housed 67 young athletes – 27 girls and 40 boys – who have now been sent home and asked to spend time with their families. The facility is meant to train athletes at water sports. The four girls who had attempted suicide were al rowing champions.
The Union sports ministry has said it will send part-time counsellors to various facilities run by SAI.