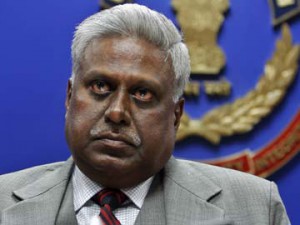 NEW DELHI : CBI chief Ranjit Sinha has been given 10 days to respond to a request in the Supreme Court that seeks his removal from office for allegedly trying to protect companies and people who his agency is investigating on criminal charges. The court has fixed the next hearing for September 19. Mr Sinha, 61, has been accused in a retinue of petitions by Prashant Bhushan of abusing his office as head of the country’s premier investigating agency.
Mr Bhushan is a lawyer-activist and a senior leader of the Aam Aadmi Party. His appeals led to the Supreme Court agreeing two years ago to monitor the CBI’s inquiry into how and why telecom and coal resources were distributed without a transparent bidding process. In the absence of an auction and a free-hand given to crony capitalism, the country lost lakhs of crores, the state auditor has said.
To bolster his claims against the CBI director, Mr Bhushan has asked the Supreme Court to review a diary that recorded the visitors to Mr Sinha’s home. The list, which has been leaked to the media, allegedly includes executives from Reliance Telecom, which has been charged by the CBI of offering bribes in exchange for an out-of-turn mobile network license.
Other house calls allegedly featured Congress leaders whose relatives and firms have been linked to the coal scam. Mr Sinha has not denied the home visits, but has said they were less frequent than claimed by some media reports, and that they did not influence him. Mr Bhushan has challenged that view, demanding that the CBI chief be removed and investigated. Both the telecom and the coal scam seared the previous government headed by Dr Manmohan Singh, which was trounced in May by the BJP.