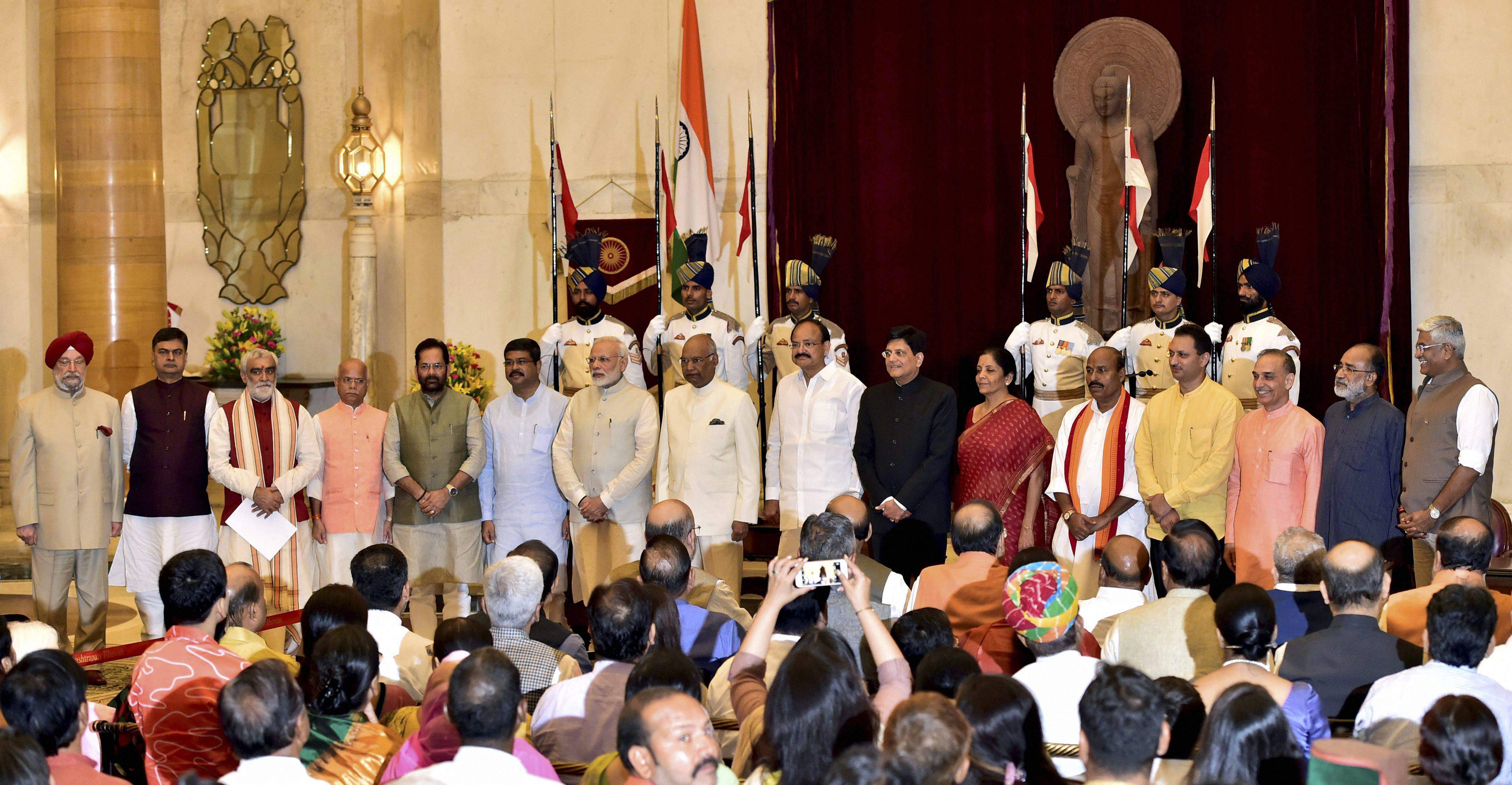 NEW DELHI : Prime Minister Narendra Modi’s third and major cabinet reshuffle today, which saw the change of portfolios of 32 ministers, has thrown many surprises.
The most significant of them all has been the elevation of Nirmala Sitharam from a minister of state with independent charge to not just as a cabinet minister but being allocated the heavyweight defence portfolio. r after Indira Gandhi, who held the department for a short while when she was Prime Minister in 1982.

Piyush Goyal will be the new Railways Minister after a cabinet reshuffle today that saw nine new ministers take oath. Nirmala Sitharaman and Mr Goyal too took oath after being promoted to cabinet rank along with Dharmendra Pradhan and Mukhtar Abbas Naqvi.

Prime Minister Narendra Modi’s council of ministers was expanded on Sunday, with nine new faces including four former bureaucrats being inducted, suggesting an admission of talent crunch in the BJP ranks.  The four are former Union home secretary R K Singh, former Mumbai Commissioner of Police Satyapal Singh, former diplomat Hardeep Singh Puri, and retired IAS officer KJ Alphons
Kannanthanam. This was the third cabinet reshuffle since the National Democratic Alliance (NDA) came to power in 2014.
The mega Cabinet reshuffle saw the promotion of Piyush Goyal as the new Railway minister. Power minister Goyal was handed over the Railways portfolio after Suresh Prabhu offered to step down from his post, in the wake of a spate of train derailments recently. It has been said that Goyal had brought about a turnaround in power production and delivered on the government’s plan to electrify villages.

The five other new faces include MPs Ashwini Choubey from Bihar and Anant Kumar Hegde from Karnataka. The others to be inducted are Shiv Pratap Shukla, a Rajya Sabha member from Uttar Pradesh; Virendra Kumar, a Scheduled Caste member of Lok Sabha from Madhya Pradesh; and Gajendra Singh Shekhawat, a Lok Sabha member from Rajasthan. The swearing-in ceremony saw the elevation of four MoS to cabinet rank and the induction of nine new MoS rank ministers.

Prime Minister Narendra Modi also congratulated Cabinet ministers and Ministers of State and said their wisdom “will add immense value” to his government. “I congratulate all those who have taken oath today. Their experience and wisdom will add immense value to the council of ministers,”
Modi tweeted.
He specifically congratulated Nirmala Sitharaman, Dharmendra Pradhan, Piyush Goyal and Mukhtar Abbas Naqvi for being elevated to the Cabinet. Nine others, including former diplomat Hardeep Singh Puri, were made Ministers of States.
Pradhan is known to have spearheaded one of Prime Minister Modi’s main schemes – the “Give it Up” plan for people to forego subsidised cooking gas or LPG voluntarily. Beside managing to maintain ties with the Opposition parties, Naqvi has done wonders for the Union Government as the spokesperson in the Parliament and outside.
Nirmala Sitharaman, serving as the Minister of State (Independent Charge) for the Ministry of Commerce and Industry as well as a Minister of State for Finance and Corporate Affairs under the Ministry of Finance headed by Arun Jaitley, also took the oath. Sitharaman had travelled to China for a BRICS meeting, in the middle of a lengthy standoff at the border over Doklam.

The clear indication as on date is that the reshuffle is only the first in a series of future rejigs before the party actually sits down to thrash its electoral strategy. The reshuffle was necessary. From the administrative point of view, vacancies needed to be filled and senior ministers relieved of additional portfolios and the party needed to shed some deadwood. With Prabhu’s exit, Piyush Goyal, who was elevated to Cabinet rank on Sunday, will take over as the 39th Railway Minister of India – the ninth in the last eight years.

After cabinet reshuffle, Shiv Sena MP Sanjay Raut said the NDA is “almost dead” and that BJP remembers it only when it needs some support. Though a long-time ally of the BJP, Sena has often been at loggerheads with the senior partner. Its lone member in the Union ministry is Heavy Industries Minister Anant Geete. “BJP-led National Democratic Alliance exists only on paper.

The AIADMK and JD(U) were two allies which were widely believed to be joining the government. On Sunday Morning however only BJP ministers took oath. Does this exercise at cabinet expansion leave scope to bring allies on board in the future? Perhaps there is. With some ministers holding multiple portfolios, the allies if sworn in later can be allocated these ministries.

It was a great experience. Not possible to continue indefinitely in two ministries. Happy to have a competent successor, says Arjun Jaitley. “Now, we have two competent women in the Cabinet, which is not just great for the women of this country, but also for the nation. Our External Affairs Minister is a lady, our Defence Minister is a woman too”
. “Performance is the only message that the Prime Minister is trying to send through the reshuffling,” says Arun Jaitley.fence Minister of India – the second woman to be in-charge of the portfolio after Indira Gandhi. By virtue of her elevation she automatically is now part of the all-powerful Cabinet Committee on Security (CCS).