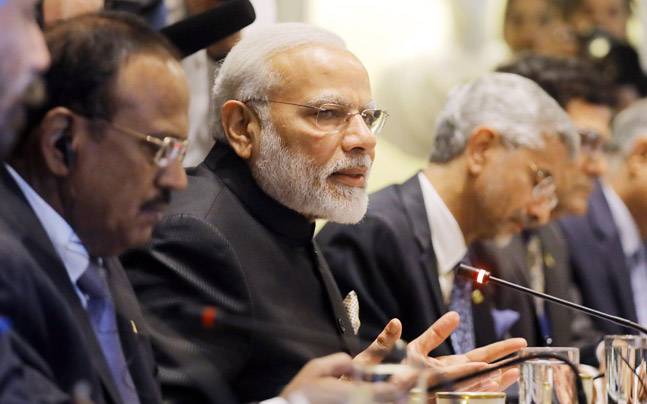 HAMBURG: Prime Minister Narendra Modi and Chinese President Xi Jinping today came face to face at the BRICS leaders meeting in Hamburg that was held on the sidelines of the G20 summit.

Amid the border standoff between the armies of India and China leading to starin in bilateral ties, the  two leaders complimented each other’s nations roles in furthering the objectives of the grouping and the fight against terrorism.
Prime Minister Narendra Modi offered full cooperation for the successful holding of the summit of the five-nation bloc in China later this year. The two leaders are however not scheduled to hold a bilateral meeting with Beijing citing that the bilateral “atmosphere” is not good due to the face-off between their armies in Doklam region in the Sikkim sector.
The two leaders had last met in the Kazakhstan capital last month during the SCO summit. Addressing the meeting, Modi appreciated the momentum in BRICS under the chairmanship of President Xi and extended full cooperation and best wishes for the BRICS Xiamen Summit.
Concluding the meeting immediately after Modi’s remarks, President Xi appreciated India’s strong resolve against terrorism and the momentum in BRICS introduced under India’s chairmanship and through the outcomes of the Goa Summit in 2016. He also appreciated India’s success in economic and social development and wished India even bigger success.
Modi supported “collective voice” against protectionism, especially regarding skilled professionals, at BRICS leaders meet. While addressing the BRICS leaders’ informal meet, PM Modi said, BRICS has been a strong voice and needs to show leadership on terrorism and global economy.
There were reports that Modi and Xi may meet on the sidelines of the G20 Summit to resolve the standoff.  China’s state-run media yesterday had quoted Chinese analysts as saying that Beijing would be forced to use a “military way” to end the standoff in the Sikkim sector if India refuses to listen to the “historical lessons” being offered by it.
China on Thursday ruled out any bilateral meeting between Prime Minister Narendra Modi and President Xi Jinping on the sidelines of the G20 Summit saying the “atmosphere” was “not right” for such meeting.
“The atmosphere is not right for a bilateral meeting between President Xi and Prime Minister Modi,” a Chinese Foreign Ministry official said ahead of the summit beginning today.

China and India have been engaged in a standoff in the Dokalam area near the Bhutan tri-junction for past 19 days after a Chinese Army’s construction party attempted to build a road. Doka La is the Indian name for the region which Bhutan recognises as Dokalam, while China claims it as part of its Donglang region.