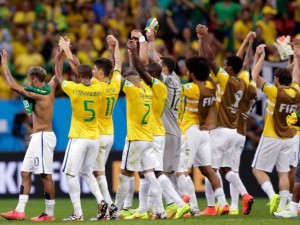 BRASILIA: An anxious nation and its capital city exhaled in relief Monday. Their beloved national soccer team, which has not played with the precision and dominance that many had hoped for in the World Cup, nevertheless moved on to the next round with a convincing win.
Playing in front of a pulsating crowd, Brazil beat Cameroon, 4-1 at Estadio Nacional Do Mane Garrincha to win Group A. It will play Chile in the round of 16 on Saturday in Belo Horizonte as an already captivating tournament moves into another gear.Going into the game, it was possible for Brazil to finish second in the group or even fail to qualify at all, adding a level of tension to the proceedings.
But Neymar, who scored two goals in Brazil’s opening game, once again salvaged the Brazilians from the possibility of a demoralizing end by scoring two first-half goals.Fred, Brazil’s under-pressure man up front, followed with his first goal of the tournament. The day before the game Thiago Silva, Brazil’s captain, guaranteed that Fred would score.
Brazil has not lost a game in the group stages since falling to Norway in 1998.
Cameroon finished its campaign in utter disaster, with more arguments among the players than goals. Cameroon did manage its first goal on Monday, putting a brief fright into the home fans.But in the end, Brazil overwhelmed them, and when Fernandinho slipped the fourth goal past Cameroonian goalie Charles Itandje, the tension eased and the party began.
With the audience desperate for a goal to unleash their nervous excitement, Neymar provided the moment, splitting two Cameroon defenders and talking a square pass from Luiz Gustavo in the 17th minute. One touch was all it took, and Brazil had the lead.
It brought a thunderous din, but the crowd went silent in the 26th minute when Cameroon shockingly drew even. Joel Matip redirected a Allan Nyom cross past Julio Cesar, the helpless Brazilian keeper. Nyom had taken the ball down the left wing, beaten Dani Alves, not once but twice, to find enough space to cross the ball, but the real villain on the play was David Luiz, who let Matip slip in behind him for the touch.
But 9 minutes later Neymar struck back, taking a Marcelo through ball from the left, moving along the edge of the box before pounding home under the out-stretched leg of Nicolas Nkoulou and back behind Itandje for the score.Neymar received an almost louder cheer when he did a pirouetting little drag back in midfield that delighted the crowd.
Just before halftime, Neymar, Oscar and Paulinho strung together a series of tiny intricate passes inside the box to set up Hulk, but he was unable to control the ball on the final pass.
Most of the second half was a time to celebrate a Brazil win.