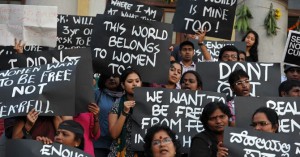 BANGALURU: In a horrific case which brought back memories of the gruesome gang-rape in Delhi in 2012, a 22-year-old BPO employee was allegedly gang-raped in a moving van late Saturday night.The sequence of events is eerily similar to the Delhi case.

The girl, who had been out with her friend in Bommanahalli, had to return to her PG accommodation in Madivala and was looking for an autorickshaw to take her there. Not able to find one, the girl finally decided to get into a van, which offered to drop her at Madivala at 10 p.m.
“The friend tried to dissuade her as there were not enough passengers in the vehicle. However, she insisted and got into the vehicle,” a senior police official said.The girl returned to her room in Madivala only around 1.30 a.m. and told her friends she was gang-raped by two men in the moving van. They rushed her to St. John’s Hospital around 2 a.m.
The city police came to know of the incident, when the hospital informed the Madivala police of a medico-legal case early on Sunday.“The girl was gang-raped by the driver and cleaner of the van as they were driving the vehicle for around three-and-a-half hours. She was also taken to a secluded spot and later dropped at Madivala,” said Police Commissioner N.S. Megharik.
Deputy Commissioner of Police (South East) Rohini Katoch Sepat said the victim was unwilling to lodge a complaint on Sunday, and the police counselled her to do so, after which she lodged a complaint on Monday.
“The victim has undergone medical examination at St. John’s Hospital and the examination has confirmed rape,” she said.The police have formed three special teams to probe the case. “We are analysing the CCTV footage of traffic cameras on the route to try and identify the vehicle. We have some leads and we will nail the culprits soon,” an official said.