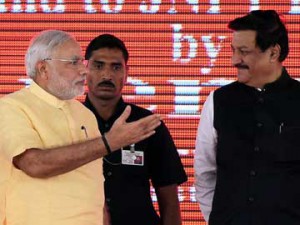 MUMBAI: Prime Minister Narendra Modi will launch a major project in Maharashtra today – a metro for Nagpur – but Chief Minister Prithviraj Chavan is boycotting the event because last week, he was heckled at two other places in the state where he made a joint appearance with the PM.”We are not insulted that the Chief Minister is skipping the PM’s function,” said BJP leader Vinod Tawde, describing Mr Chavan’s RSVP as an overreaction.
Earlier this week, another Congress chief minister, Bhupinder Singh Hooda of Haryana, vowed he “will never share the stage again” with the PM because crowds booed him and cheered Mr Modi at a public event. The PM was seen urging the crowds to pipe down, but Mr Hooda was forced to rush through the speech that he was delivering.
Haryana and Maharashtra vote soon for their next governments, and the BJP hopes to evict the Congress in both states. The Congress says the BJP engineers large-scale booing to humiliate chief ministers. The BJP says that the Congress must recognize that public sentiment has turned against it after years of inept governance.
In support of its leaders, the Congress says “no self-respecting Chief Minister will attend functions if BJP supporters boo Chief Ministers in the presence of PM Modi.” The party’s spokesperson Shobha Oza said, “It is a conspiracy by the BJP to humiliate our leaders.”