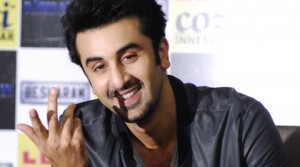 MUMBAI: In the period world of Bombay Velvet, Ranbir Kapoor – with his pencil mustache, crop of flyaway hair and broad-shouldered jacket – looks more than a bit like his grandfather Raj Kapoor. And he has some of his raffish, leading-man charm.
Like the elder Kapoor in such films as Awaara and Shree 420, Ranbir plays an underdog battling the system. He’s Johnny Balraj, a petty gangster who doesn’t mind taking a pounding or doling one out. Johnny runs a nightclub and longs for a piece of the real-estate pie that is Bombay in 1969, a city on the cusp of (over)development.
The director Anurag Kashyap’s cinematic touchstones don’t end with Raj Kapoor. He also has a thing for American gangster movies. There are echoes here of The Godfather and Scarface (Brian De Palma’s). James Cagney shows up, too; Johnny watches The Roaring Twenties, with Cagney dying on snowy steps as a blonde intones, “He used to be a big shot.”
Which is to say that Bombay Velvet (great title) is more about movies than it is about gangsters. Kashyap’s restless camera likes the look of rain on windshields and tommy guns, Art Deco nightclubs and girl singers with beehive ‘dos.

If Kashyap’s previous films, like Ugly and That Girl in Yellow Boots, have had an indie, sometimes arty sensibility, here, and in the ambitious Gangs of Wasseypur, he paints on a bigger canvas, or perhaps a bigger screen, wedding indie impulses and Bollywood storytelling. For much of its first half, Bombay Velvet hums with the kind of energy found in movies by the 1970s American directors Kashyap seems to admire. (Martin Scorsese is thanked in the head credits.)
Kashyap is perhaps too faithful to his Bollywood imperatives, though. In the grand tradition, his film is overlong (149 minutes) and overplotted. (It’s hard to keep track of all the dirty deals and dirty dealers carving up Bombay.) And just when you expect it to explode some of the clichés it reinvigorates, it instead embraces them.
Still, as one fast operator tells our hero, “The map of Bombay is being redrawn, Johnny.” Even with its faults, Kashyap’s film is more evidence that the map of Bollywood is, too.