GANDHINAGAR:  In Gujarat’s capital Gandhinagar, veteran BJP leader LK Advani filed his nomination today accompanied by chief minister Narendra Modi.
Before filing his nomination, Mr Advani spoke to NDTV and offered rich praise for the Gujarat Chief Minister. “I have no doubt (he will be an able administrator as PM). After all he has a record to show even as an administrator, as part of a government,” he said. 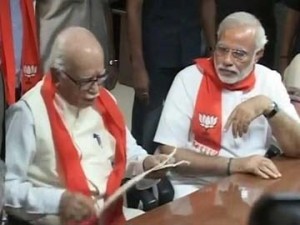 While the two leaders have been at odds for several years, the party planned today a show of unity to send out the message that the party’s top two have put their differences aside and all leaders are on board for Mr Advani’s campaign.The ‘Kodak moments’ come after 9 months of acrimony between BJP’s big two, which was being interpreted as trust deficit. Mr Advani had skipped the BJP’s conclave in Goa in June last year and resigned from all party posts over Mr Modi’s appointment as the BJP’s campaign chief.
In September, Mr Advani had unsuccessfully challenged the BJP’s call to pick Mr Modi as its prime ministerial candidate. Apprehensive that Mr Modi may not work for his win from Gandhinagar, Mr Advani had proposed Bhopal as his preferred constituency. Opinion polls show Mr Modi leading the BJP to its strongest showing ever. The BJP with its allies is likely to get 259 seats, just 13 short of the halfway mark in Lok Sabha.
Mr Advani today described Mr Modi as “brilliant and efficient event manager who brought this capacity to governance” but said Atal Bihari Vajpayee remains BJP’s undisputed gold standard. “I would not compare him (Narendra Modi) to Atalji. He was a class in himself. The main ideologue of the party was Deen Dayal Upadhyay and the person to implement it in governance was Atalji, ” he said.
Mr Advani was once considered Mr Modi’s mentor but today said he wouldn’t call Modi his ‘protege’. The 86-year-old, who had lobbied to move constituency to Bhopal in Madhya Pradesh, also said he is committed to Gandhinagar, which he has represented in Parliament for four consecutive terms since 1998.