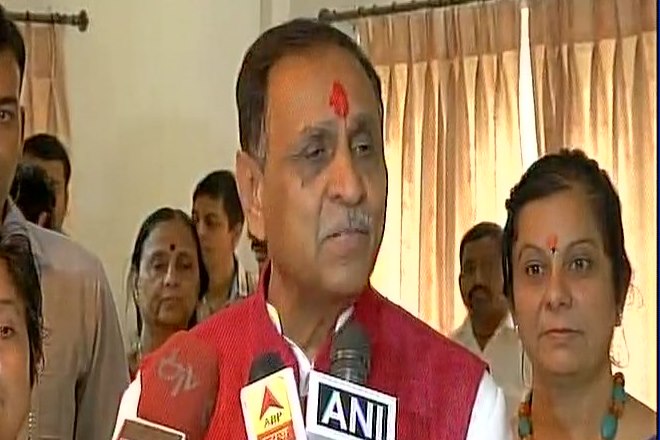 AHMEDABAD : Gujarat Chief Minister Vijay Rupani on Monday exuded confidence that BJP will win all the three Rajya Sabha seats, according to ANI report. Raupani also said that political secretary to Sonia Gandhi Ahmed Patel will definitely lose.
Slamming the Congress’ move to keep their MLAs in resorts in Karnataka and Gujarat, Rupani said that people were dying in flood and party’s legislators were enjoying. Party MLAs are not under Congress’ control as high command did not trust them.
BJP chief Amit Shah, Union Minister Smriti Irani, and former Congress party chief whip Balwantsinh Rajput are contesting on BJP tickets, while Congress has fielded Ahmed Patel for a seat. Polling for three Rajya Sabha seats in the state will be held tomorrow. Fourty four Congress MLAs, who were lodged at Eagleton Resort in Bengaluru by the party high command for over a week, returned to the state on Monday morning, according to reports.
It has been learnt that after their arrival at Ahmedabad airport, the legislators were taken to Neejanand Resort in Anand district. The MLAs were taken to Bengaluru after six of Congress’ MLAs had quit the party on July 27 and July 28, according to PTI. Subsequently, the legislators were taken to Karnataka, where Congress is a ruling party, to prevent alleged “poaching” attempts by the BJP, the report said.

A day before the Rajya Sabha elections Congress lawmaker DK Suresh on Sunday told “Gujarat Congress is united, MLAs want to vote Ahmed Patel and will get back seat of Congress.” Earlier, six Gujarat Congress legislators, including Shankersinh Vaghela, resigned from the party to join the BJP.

Congress alleged that state BJP had offered Rs 15 crore to each of its MLAs alongwith a ticket in Gujarat polls along and funds to contest the elections. Following this, the Congress shipped away the 44 MLAs to Karnatala to prevent them defecting before the Rajya Sabha polls.