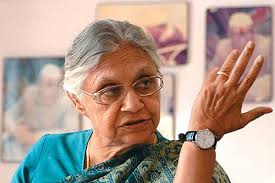 NEW DELHI : As deadlock over government formation in Delhi continues, senior Congress leader Sheila Dikshit on Thursday said that Bharatiya Janata Party (BJP) should be given a chance if the party thinks it can form the government in the national capital. Speaking to ANI, Dikshit said, “If Delhi BJP president Satish Upadhyay has given his statement that his party will seriously analyse the situation if they are invited to form the government, then he would have said it with some responsibility.” She further said that the real test of BJP would come at the floor of Delhi Assembly.
The former Delhi CM opined that in democracy, an elected government is always better because it is represents the people. Dikshit’s reaction comes two days after the Supreme Court asked the Centre to apprise it on October 10 of the outcome of the process undertaken by Lt Governor Najeeb Jung on government formation in Delhi, saying “alleged horse-trading” will continue if a decision is not taken. In the 2012 Delhi polls, while BJP had won 31 seats in the 70-member house, AAP had won 28 seats and Congress managed to bag only eight.
BJP, the single party has 28 MLAs in a House of 70. Its ally Akali Dal has one MLA. BJP had won 31 seats but three party legislators Harsh Vardhan, Ramesh Bidhuri and Pervesh Verma were elected to Lok Sabha and had to resign their Assembly seats. Delhi has been under President’s rule since February 17 following resignation of Arvind Kejriwal-led-AAP government which was in power for 49 days.
The government led by Kejriwal had resigned on February 14 after the party’s pet project, the Janlokpal Bill, could not be passed due to opposition from BJP and Congress. President’s Rule was imposed in Delhi on February 17. The Lt Governor had not favoured dissolution of the Delhi Assembly as recommended by the Council of Ministers headed by Kejriwal and kept the Assembly in suspended animation.