NEW DELHI : The BJP Parliamentary Party will meet on May 20 to formally elect Narendra Modi as its leader, a formality before his appointment as Prime Minister.This was decided a meeting of the Parliamentary Board, the highest decision-making body of the party chaired by BJP chief Rajnath Singh and attended by Mr. Modi, L.K. Advani, Murli Manohar Joshi, Sushma Swaraj and other top leaders. 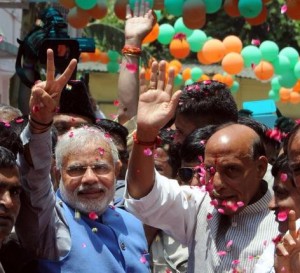 In a brief address to the media, Rajnath Singh said the NDA allies will also be invited for a meeting on the same day where he will be chosen as leader of the coalition.Dismissing media speculation, he said no date has been fixed for swearing-in of Mr. Modi as the Prime Minister. It will be decided after the Parliamentary Party meeting.Mr. Singh was addressing media along with Mr. Modi, Mr. Advani and other top leaders after over one-hour meeting of Parliamentary Board which adopted a resolution applauding the stewardship of its prime ministerial candidate for his “tireless efforts” and “inspirational” leadership.
The resolution said Mr. Modi “gave a direction to the campaign with a vision” and also thanked BJP workers along with “social and cultural organisations”, an apparent reference to RSS and affiliate groups.It underlined that India needs a government which is “effectively governed and puts the country on a high growth track and sets highest standards of probity.”
The BJP wants to build a country which is “strong, self-respecting and self-reliant”, the resolution said.Commenting on the election results, the Board hailed the verdict given by people. “People have spoken and spoken decisively. It is for the first time that a non-Congress government has got mandate on its own to govern.”