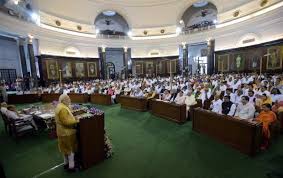 MUMBAI: Not just BJP MPs, their secretaries and assistants are also attending classes run by the Rashtriya Swayamsevak Sangh or RSS. They begin a six-day training course today to earn a certificate in “political assistantship”.Among the skills they will be taught is to watch out for sting operations and suspicious visitors.
Some 100 private secretaries and assistants on the staff of parliamentarians are participating in the course at Rambhau Mahlagi Prabodhini, an RSS training institute. The fee of Rs. 5,000 each comes from the MPs’ pockets.The aides will be groomed in office etiquette, social media, letter drafting and research, besides the history and ideology of the BJP and RSS.
They will also receive instructions on going proper background checks on people who come to meet MPs and to be alert about recording devices used in sting operations.
Such a course was last organized seven years ago, at a time the BJP was in the opposition and the Congress-led UPA was in power.Since it came to power in May with a massive mandate, the BJP has bombarded its members, including 160 first timers, with rules on best behavior and performance in Parliament.They have been asked to be punctual and regular, or risk being named and shamed in an internal report.
The party has plans for monthly assessments of its 320-odd MPs; they will be watched both in and outside Parliament and their report card will decide whether they can make it to the cabinet or can be asked to lead important debates in Parliament.