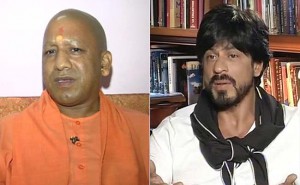 NEW DELHI:, The ruling BJP, battling outrage over senior leader Kailash Vijayvargiya’s tweet attack on Shah Rukh Khan, faced more anger today when party lawmaker Yogi Adityanath compared the popular actor with 26/11 terror mastermind Hafiz Saeed of Pakistan.
“Shah Rukh should understand that if Muslims don’t see his films, he will be on the roads. There is no difference in what Shah Rukh Khan and Hafiz Saeed say,” said Aditynath, not long after Mr Vijayvargiya said that he was withdrawing the anti-Shah Rukh tweets that earned him strong criticism from his own party and others.
Reacting to Mr Khan’s comments on “intolerance,” Mr Vijayvargiya, a BJP general secretary, had tweeted on Tuesday, “Shah Rukh Khan lives in India, but his heart is in Pakistan. His films make crores here but he finds India intolerant.”
The retraction came on Twitter too. “I did not intent to hurt anyone. I take back my tweets,” the BJP leader said, and also, “Shah Rukh wouldn’t have been the most popular actor after Amitabh (Bachchan) had India been intolerant. My tweets were misunderstood by some.
On Wednesday afternoon #KailashVijayvargiyaLeaveIndia and #Yogi Adityanath trended worldwide on Twitter, as Shah Rukh Khan’s fans took apart the BJP leaders for their comments.

The BJP has distanced itself from the remarks of both leaders. “These are uncalled for, not correct comments. You cannot compare Shah Rukh Khan or any Indian citizen with a terrorist. This is not the BJP viewpoint,” said the party’s Nalin Kohli.
BJP ally the Shiv Sena said, “Shah Rukh Khan should not be targeted for being a Muslim.”
The opposition Congress made it clear that it would not allow the controversy a quiet burial. It has demanded the arrest of Mr Vijayvargiya and Mr Adityanath. “PM has remained silent… PM must explain… is he conscious of his constitutional duties?” asked the party’s Anand Sharma.
“Religious intolerance, or intolerance of any kind, is the worst thing and will take us to the dark ages,” Shah Rukh Khan had said on Monday while talking to a TV Channel.
He had also said, “You have no right to tell me if I can stay in this country… I always say this is the country where my father fought for freedom… So please shut up.”