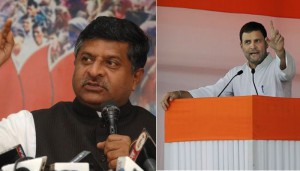 NEW DELHI: Hitting back at the Congress party over its Kisan rally at the Ralila Maidan here against the govt’s proposed Land Acquisition Bill, the Narendra Modi-led NDA government on Sunday took a jibe at the grand old party saying, Congress couldn’t come up with a new speech and also put a question mark over its introspection.
Countering Congress’ allegations that NDA government is anti-farmers and anti-poor, BJP said Narendra Modi-led Government at the Centre is for the poor and underprivileged. BJP further added that Rahul Gandhi uttered a “white lie” while addressing the Kisan rally.
Shortly after the rally got over, addressing a press conference here, senior BJP leader and Union Minister for Communications and Information Technology Ravi Shankar Prasad said, “Did Congress introspect at all? And even if they did, they couldn’t come up with a new speech?”
“Rahul Gandhi needs to understand that India is no monarchy and the popular choice is the BJP. He should apologise for insulting the most popular mandate. We condemn this brazen contempt against the popular mandate,” said the BJP leader.
He further added that Government at the Centre is for the poor and underprivileged. “Prime Minister Narendra Modi is a leader, recognised worldwide. It is the government for the poor and the underprivileged,” he said.
“I thought after a couple of months of introspection, Rahul Gandhi will speak a new language,” he added.Responding to Gandhi’s charges against the central government allegedly making changes in the Land Acquisition Act of 2013, the BJP leader asked “why is Rahul Gandhi stating a white lie by saying that amendments have been been done to favour industrialists”.
“The amendments have been done to favour the farmers,” he said adding that Rahul Gandhi spoke a lot about the Gujarat model but “we want to ask Sonia and Rahul as to what is the Vadra model of development and land acquisition,” IANS quoted him as saying.

“Don’t you need land for canals and for Indira Awas Yojna… and if the UPA’s land act was perfect, why was it being opposed by their own chief ministers,” Prasad asked.”Why had Congress chief ministers opposed their own land act,” he asked, adding that the prime minister had made clear that first government land would be acquired. “Why such a lie,” he wondered.
On Rahul’s remark that PM Modi, while in Canada, had insulted the country by saying that he was clearing the mess of the past fifty years, Prasad said: “Did the 2G scam, coal scam not happen during the Congress regime?”
Prasad also took a dig at Rahul Gandhi’s going on leave, saying that someone (Modi) goes abroad to raise the prestige of the country while others (Rahul) to contemplate.Senior BJP leader Rajnath Singh also slammed Rahul for “misleading” peasants at the Kisan Maha rally and made an appeal to the community to not get misguided by rumours spread against NDA government’s Land Acquisition Ordinance and other policies.
Another BJP leader and Union Minister Mukhtar Abbas Naqvi said, “Congress should do some homework, BJP Govt is pro-farmer, don’t need certificate from Congress.”
“Afraid, only Congress policy now that seems to be visible is policy of lies,” said BJP national spokesperson MJ Akbar while speaking to News Agency ANI.Further taking on the last UPA governmnet, he said, “In UPA regime poor had been desperately looking for jobs, today under Modi Govt jobs are going to look for poor, it’s a visionary change.”
BJP spokesperson Nalin Kohli said that Congress vice-president Rahul Gandhi was out on a foreign visit at an unknown destination for personal reasons, whereas Prime Minister Modi went on a foreign visit to serve the country.

“Rahul Gandhi was outside India at an unknown destination for personal reasons, Narendra Modi was outside to serve the country,” he said.

“The approach at the rally was to relaunch Rahul Gandhi once more and Rahul’s focus has been, event to event and photo opportunity politics,” he added.

Meanwhile, Union Rural Development Minister Chaudhary Birender Singh accused the Congress party of misleading the farmers.
“I would like Sonia ji to read our amendments, and tell us which amendments are not in favour of farmers. They are trying to mislead the farmers,” he told the media here.
Earlier in the day, farmers from across the nation, specifically from the northern parts of Punjab, Haryana and Rajasthan arrived here to attend the Kisan rally organised by the Congress party.
While Congress vice president Rahul Gandhi said the nation’s farmers were living in fear these days, and were convinced that the government of the day has forgotten them and their contributions to India’s welfare. Party president Sonia Gandhi said that the voice of India’s farming community can never be silenced or suppressed, and any attempt to do so, would be countered with all the power at her command.
Launching a direct broadside against the NDA Government and its Prime Minister Narendra Modi, Rahul Gandhi, who has just returned after a 57-day sabbatical, said, “Farmers are afraid of the changes that are being introduced to the (land) bill we had brought in 2013. Today, when a farmer goes to bed, he doesn’t know what will happen to his land the next day. He is living in fear.”