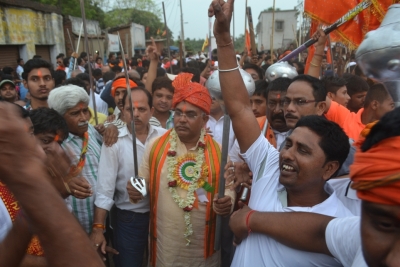 KOLKATA: Spurred by Uttar Pradesh electoral success and nuking Indian political dynasties, for new BJP leadership looking into West Bengal may not be surprising but introducing a new Lord Ram (not known to Bengal) as an Ism may not be understandable for voters!

Interestingly, worshiping Lord Ram without pomp and show has not been new in Bengal. There are temples more than three hundred years old where Ram Sita have been quietly worshiped daily and a thing may not be known to many state BJP leaders.

Of course, there has been a spurt in Lord Hanuman temples, big or small if not everywhere in new places. Again it isn’t that Lord Hanuman wasn’t worshipped at all. It’s as old religious a tradition as worshipping Ram Sita.
Incidentally, a Fourteenth Century poet Kritibash Ojha wrote first Ramayan in Bengali in which (even villagers, town folks and all have been reading and retelling the stories to little ones in the families for centuries) Lord Ram and Sita were introduced to Bengalees.

Without any intellectual pretensions, and with much deviations, poet Kritibash introduced a Lord Ram whose character appealed to all!Thus, there are Bengalees, who read both Valmikhi and Kritibash

who suddenly find BJP’s new Ras as surprise. At least epic doesn’t support new characterization of Ram, as if always with sword or other traditional weapons,’’ said a professor of literature of Calcutta University.
Even Tulshidas’ Ramcharit Manas did not, despite deviations, exactly supports BJP’s neo characterization,’’ he quips.Where this Ram comes from?’’ Asks a priest of oldest Lord Siva Temple in Bally, just near Ramakrishna Mission on the bank of Ganga.

With Left retreating rapidly, well in so-called Left Bengal there’s an ideological vacuum but “BJP’s new Ram may not fill the same instead in politics they should try it out politically than using Ram as a political tool and this may not work,’’ said another Calcutta University professor in Political Science.
Bengalees know Ram as destroyer of evil Ravana for his obsessions for torturing women and killing innocent dissents, though he was a knowledgeable king
Bengalees know Ram from Kirtibash epic as a king who was  bothered and pondered over the well being of Prajas (subject not exactly a common English for the Sanskrit word prajas). And they’re not Plebians like Roman kings would call them nor slaves out of which a Spartacus who led a slaves and gladiators’ movement against the establishment and destroyed by Roman Army.

But BJP’s new thrust is understandable, with Opposition, Left and Congress, gone, they’re trying to walk into the vacuum. “May be it’s not politically incorrect, but introducing a new Ram, may not be successful, they need to do it politically,’’ said an intellectual who feels demonetization spin-offs gains or no gains which only time will tell,  will also not work in Bengal.
It should be what politically ambitious BJP’s new leadership should do to emerge as true opposition party against Mamata Banerjee’s Trinamool Congress,’’ he added, saying “not even rewriting of party’s national executive resolution in Bhubaneswar would change it.’’