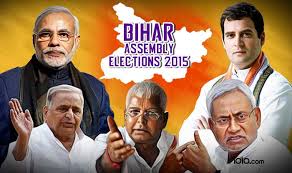 NEW DELHI: “Mother of all elections” – This is how Chief Election Commissioner Nasim Zaidi termed the upcoming Assembly Elections in Bihar. People who know the politics of Bihar would know why Zaidi said what he said. The state has all the ingredients which make an election intriguing and exciting and this time around with friends turned foes and foes turned friends, the battle of Bihar has become nothing less than a cutting edge thriller.
Yes, the stakes are high in the upcoming polls and the results in all likelihood will determine the political future of many leaders. No wonder both the BJP-led National Democratic Alliance (NDA) and the JD(U)-RJD-Congress led grand alliance are leaving no stones unturned to reach the finishing line.
The BJP after the debacle in Delhi is desperate to win Bihar. A win in Bihar will reinforce their stand that the charisma and the popularity of their star campaigner and Prime Minister Narendra Modi has not waned. It will also enthuse the cadres for the polls in Assam, West Bengal, Tamil Nadu and Kerala next year.

Choosing not to name a chief ministerial candidate in Bihar unlike the grand alliance whose face is current CM and JD(U) leader Nitish Kumar, the BJP is banking heavily on Modi. The presence of large crowds at Modi’s rallies, especially of the youth (46 percent of the electorate in the state is said to be the age group of 18-40 years) has given the BJP reason to be optimistic. Their optimism also stems from the fact that in the 2014 Lok Sabha polls the BJP won 22 seats out of 40 in Bihar (and had a vote share of 29.9 percent) and 31 along with its allies.
Working to a plan, the BJP has promised to turn around the fortunes of Bihar if voted to power and has been hard-selling the Rs 1.25 lakh crore package announced by PM Modi for the state in numerous posters, banners and hoardings.
But apart from the promise and the package, it was imperative for the saffron party to look beyond the upper caste (largely consisting of Brahmins, Bhumihars, Rajputs and Kayasthas who are one-sixth or 14-15 percent of the electorate and where the BJP has a substantial support base) and woo the backwards and Dalits who constitute approximately 33 percent of the state’s population.

So the alliance that the BJP has stitched up with Ram Vilas Paswan’s LJP and Jitan Ram Manjhi’s Hindustani Awam Morcha (Secular) may turn out to be the clincher.
Though the pattern of voting in Bihar has been changing since 2010 when the electorate voted out Lalu Prasad Yadav’s RJD and voted for the JD(U)-BJP combine mainly on the plank of development, the fact is that caste, class and religion still matter in the state.

The alliance with Paswan (a Dusadh, a dalit sub-caste) should get them a chunk of the Dalit votes and the presence of Manjhi may help the BJP in getting inroads into the Mahadalit base.

(Manjhi belongs to the Musahar community, a Mahadalit sub-caste and his party has 13 MLAs in the present Assembly.) Not only this, the BJP has also fielded 21 candidates from the Yadav community, considered supporters of Lalu, who are nearly 15 percent of the population in the state and are said to have considerable political clout.
Together, the BJP and its allies have given tickets to three dozen candidates from the Yadav community. If the BJP is able to emerge victorious in a state like Bihar then it will truly be creating history in the right sense of the term.
For the JD(U)-RJD-Congress combine, the stakes are equally high. For Nitish Kumar, it will be a test of his credibility and his claims of being a vikas purush.
In the run up to the elections he has been under relentless attack by the BJP for forging an alliance with his one-time enemy number one Lalu whose ‘aatankraj’ or reign of terror he had harped on to win in 2005. In rally after rally Modi has warned the electorate of ‘rojana jungle raj’ if RJD-JD(U) is voted to power.
And though Nitish has repeatedly said that things have changed and law and order will be his top priority, the fact remains that his tie-up with Lalu has left him doing a lot of fire-fighting.
Interestingly, Nitish had carefully cultivated the Mahadalit vote bank in the state that comprises about 11 percent of the state’s population and 70 percent of Bihar’s SC population. (Mahadalits include 21 castes identified by the State Mahadalit Commission constituted by Nitish government in 2007).
Will his falling out with Manjhi, who he had appointed as CM, wean away a section of the Mahadalit voters – who voted for him in 2010 – is a point to ponder upon.
At the same time for the CM, it’s a battle of egos too with the Bihar polls virtually turning into a Modi versus Nitish contest. Since Nitish broke his 17-year old partnership with the BJP over Modi’s ascendency in the party in 2013, the animosity between the two has been there for all to see.
As for Lalu, he ruled Bihar for fifteen years from 1990 to 2005 mainly due to the formidable Muslim-Yadav combination he stitched together.
The MY vote bank reaped him dividends. This time too, along with the JD(U), he would be hoping that Muslims, Yadavs and Kurmis (the caste to which Nitish belongs and who account for about 4 percent of the population), who together constitute a third of the electorate would resurrect his political fortune, and launch that of his sons.
According to a survey, over 60 percent Muslims (including OBC Muslims) voted for the RJD-Congress alliance in 2014 General Elections and 21 percent had supported the JD(U). To be noted is the fact that the grand alliance has fielded as many as 134 candidates belonging to the OBCs or MBCs, 40 from SC/STs, 33 Muslims and 35 from upper caste.
Doing what he does best, Lalu has termed the upcoming Bihar elections as a Mandal versus Kamandal contest. Will the electorate repose their trust once again in a man whose rule was marred by lawlessness and underdevelopment and who cannot even contest elections because of his conviction in the infamous Fodder scam is something which can only be answered on November 08.

Talking of the Congress, its presence has been diminishing in the state since 1990 and it is hardly a player in Bihar. In 2010, the Congress on the insistence of its vice president Rahul Gandhi had fought all 243 seats and had ended up with a paltry 4 seats.
This time they have been given 41 seats to fight on and would be hoping to win at least a handful in order to be some sort of a stakeholder in Bihar, besides boosting morale of cadres nationally.

And then there are the others. Samajwadi Party chief Mulayam Singh Yadav quit the grand alliance after the JD(U)-RJD-Congress gave him five seats to contest in Bihar.
Subsequently a six-party third front with SP was formed which has named NCP leader Tariq Anwar as its CM candidate. And though in 2005 the SP could win only four seats in Bihar and does not have a realistic chance of creating an impact, with its motley group it could chip away at the margin of votes and skew the results in constituencies that matter.
On the other hand, the Left front and the BSP are towing their own line but they are not even marginal players in the state. But what has created quite a buzz, especially in the media, is the entry of Asaduddin Owaisi’s AIMIM in Bihar. His party has decided to contest 24 seats in Seemanchal region (Araria, Kishanganj, Purnea, Katihar, and Bhagalpur) which has a sizeable Muslim population. If the MIM is able to polarize the Muslim vote then it may end up hurting the grand alliance and may benefit the BJP. No wonder then the JD(U), RJD and Congress have been calling Owaisi the B-team of the saffron party.
However, despite all the caste arithmetic in play and claims of being the harbinger of the poor by various leaders, at the end of it what really matters is the much needed growth and development of a state that has lagged behind for years and where people deserve an overall better life.
One can only hope that the alliance – which will be celebrating an early Diwali – comes good on its promise and fulfills all of the above.