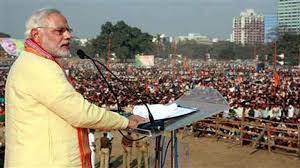 WASHINGTON: The upcoming Bihar Assembly election this month will be the biggest electoral test for Prime Minister Narendra Modi this far, scholars from a top American think-tank have said, noting that the ramifications of its results will be felt far away from the state’s borders.
“No matter what the voters of Bihar decide, the ramifications will be felt far beyond the state’s borders,” scholars Milan Vaishnav and Saksham Khosla from the Carnegie Endowment for International Peace, a top US think tank, wrote in an op-ed yesterday.
The Bihar election, which begins on October 12 and concludes on November 8, will be the “biggest electoral test” for the Modi-led BJP government thus far, they wrote.
If it prevails, this victory could provide the central government with new momentum. A win would bring BJP closer to a Rajya Sabha majority and boost its chances ahead of state elections in 2016 and 2017.
If it falls short, it would be a big blow, especially because Modi has associated his own reputation so closely with the campaign, even recently announcing a USD 19 billion (Rs 1.25 lakh crore) economic package for the state, the Carnegie scholars wrote.
The election could also make or break the careers of the Chief Minister Nitish Kumar and his new found ally Lalu Prasad Yadav, the think-tank scholars said.
“Kumar’s star, once among the brightest of all state leaders, has dimmed after the 2014 general election debacle. For Yadav, who will likely return to jail to serve time for a corruption conviction, a victory would maintain his and his family’s relevance in state politics,” they wrote.
“Forming an alliance in Bihar would provide Congress some comfort for its spate of recent electoral defeats and boost the standing of the party’s heir-in-waiting, Rahul Gandhi,” they said.