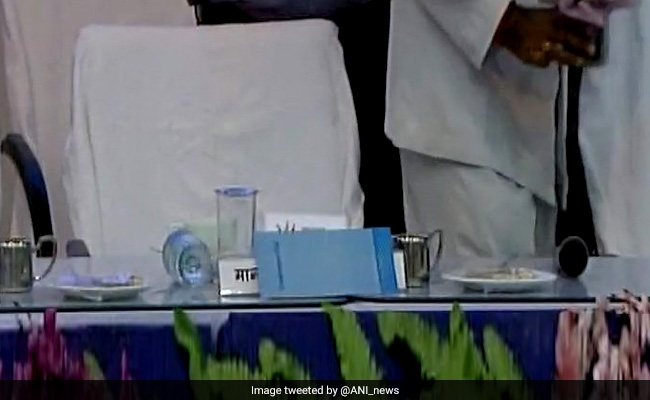 PATNA : There seems to be no end to the ongoing rift in Bihar’s ruling ‘mahagathbandhan’. In the latest development, Deputy Chief Minister Tejashwi Yadav’s nameplate was on Saturday removed from the invitation of a key event hosted by Chief Minister Nitish Kumar government.
According to sources, Tejashwi was  invited to attend and share the dias with JD(U) chief and CM Nitish Kumar at Vishwa Yuva Kaushal Diwas event in Patna. A chair with Tejashwi’s nameplate was placed on the dais in the morning. However, his nameplate was first covered and later removed just before the start of the function.
The development gave a clear indication of the widening rift between the grand alliance partners in Bihar, Nitish and Tejashwi as they both avoided sharing the stage together. Ahead of the function, JD(U) spokesperson KC Tyagi indirectly advised Tejashwi Yadav to resign by pointing out that Nitish himself had resigned in the past when he faced a similar situation.

On Friday, RJD chief Lalu Prasad came out in defence of his tainted minister son and made it clear that the latter will not resign from his post over graft charges. Lalu also claimed that the state’s ruling grand alliance is intact. “Tejashwi will not resign. There is no question of his resignation,” Lalu said after holding a nearly three-hour-long meeting with senior party leaders and legislators at his official residence. He said the RJD was going by the decision of its legislature party, which met earlier this week and decided that Tejashwi Yadav would not resign.

In signs of widening rift between the ruling alliance partners in Bihar the deadline set by Mr Kumar set to expire this evening, his party Janata Dal United (JD-U) has stepped up the pressure on the Yadavs to furnish a detailed explanation to the public of the corruption charges against them. The Bihar Chief Minister has indicated that he would prefer his deputy Tejashwi Yadav to exit the government if unable to present a rebuttal to the CBI’s charges against him.
Here is your 10-point cheat-sheet to this story:
Tejashwi Yadav, 28, has been named in a corruption case along with father Lalu Prasad Yadav. The case accuses Lalu Yadav of venality during his term as Union Railways Minister to acquire a sweetheart deal for three acres of land in Patna that is now jointly owned by Tejashwi, his mother Rabri Devi and his siblings. The CBI last week raided the residence of Lalu, also named in the case, and other properties in five cities.
Lalu Yadav’s party, the Rashtriya Janata Dal or RJD, has tried to indicate it is under no pressure as it has the most seats in the Bihar assembly – 80 of 234. “Tejashwi will not resign at any cost. The RJD has 80 legislators. We will do what we want,” party leader Bhai Virender said in Patna.
Nitish Kumar’s party retaliated by asking the RJD to shrug off the “arrogance”. “The RJD, which is showing the arrogance of 80 MLAs, should not forget that it was reduced to 22 MLAs in 2010 state poll,” said Sanjay Singh of the JD-U.
The JD-U has 71 MLAs and the third alliance partner Congress 27, while the BJP, which is the main opposition party in the House, has 53 MLAs and has already volunteered external support – siding with Nitish Kumar in a vote to keep him in office – if Lalu Yadav cuts off his supply.
Lalu Yadav, however, has indicated that he will do what it takes to keep the Bihar alliance intact. “I will not allow the maha-gathbandhan (alliance) to suffer” he told ndtv.com on Thursday evening, signaling that his son may eventually yield the resignation sought by Nitish Kumar.

Any breakthrough, however, is likely to be about as effective as a Band-Aid for a gaping wound, said JD(U) sources who believe the Chief Minister is determined that it is time to end his association with the Yadavs, whose increasing stack of corruption charges is turning into a multi-car pile-up.

Lalu Yadav was barred in 2013 from holding public office after he was convicted in another corruption case that goes back to the 90s when he was Bihar Chief Minister. His children are now ensnared in a number of cases that include alleged money-laundering.
Any crack in the JDU-RJD alliance could rearrange the government in Bihar as well as national political partnerships. Nitish Kumar has been accused by his allies, which include the Congress, of being open to propositioning by their rival, the BJP. Mr Kumar stood staunchly behind the PM’s sudden ban on high-denomination notes in November and also supported the BJP’s candidate for President, breaking rank with opposition parties.