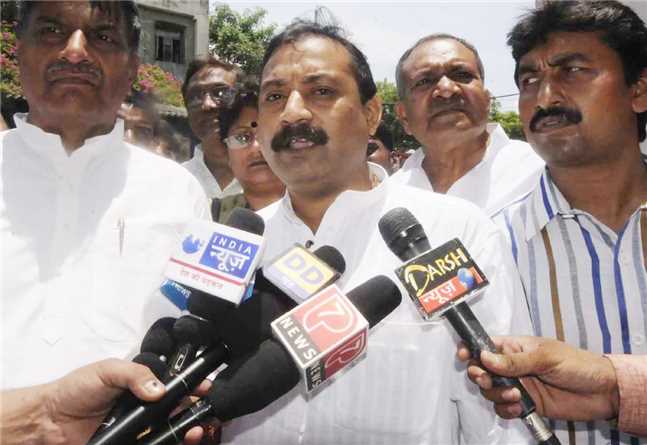 NEW DELHI : Amid reports of a split in the Bihar unit of the Congress, party vice-president Rahul Gandhi is holding a series of meetings with party legislators to discuss the political situation in the state. The crisis hit the Congress in wake of the disintegration of the grand alliance in Bihar. The Gandhi scion on Thursday met with 10 legislators to discuss party’s revival in Bihar and whether there is a need for a change of guard in the state unit.

During the course of the meeting, Rahul spoke to every MLA individually and discussed several issues including the flood situation, alliance with RJD, among others. Other than Rahul, the party’s Bihar in-charge CP Joshi and Congress Legislative Partly leader Sadanand Singh were also present.
The meeting lasted nearly three hours and the Gandhi scion spoke with every legislator for nearly 15-20 minutes informed one of the legislators who added, “He asked for suggestions on various issues and gave a patient hearing to all of us”.

Earlier on Wednesday, Rahul met 11 legislators who are rumored to be planning to quit the party and join JD(U). Sources within the party claim that the rebel group is headed by Bihar Pradesh Congress Committee president Ashok Choudhary who was not invited for these meetings. Known to be particularly close to Bihar chief minister Nitish Kumar, Choudhary is being labelled as the mastermind behind the rebellion and party legislators have asked the Congress vice-president to remove him to kill the rebellion.

“If you remove him as party president, he loses all power and would no longer be able to effect the split. This was told to the Congress vice-president by several legislators and it is expected that the decision to sack Choudhary could be announced in the next few days. Moreover, the feeling among party leaders is that he should be expelled for anti-party activities which will send a stern message to those planning to quit,” said one of the legislators who was part of the delegation that met Gandhi.

Choudhary’s attempts to engineer the split have so far been unsuccessful considering he needs 18 legislators to ensure those who leave are not disqualified. According to rules, to avoid disqualification, two-thirds members of a political party need to form a separate political party or merge with the other party. Congress has a total of 27 legislators in the state and 18 of them need to quit to join JD(U) in order to avoid disqualification. Sources claim Choudhary for now has the support of 12 legislators.

Reacting on the political development Choudhary said “I’m not sure why I am being sidelined like this,” Mr Choudhary said.He described himself  as hurt at not being invited to the talks that hope to stave off a split in the Congress, increasingly dissolute since it found itself laid off from running the state of Bihar by former ally and Chief Minister Nitish Kumar in July.
Mr Choudhary’s vigorous denial. “My father was in this party for 50 years till his death and I’m here for the last 25 years,” he said. Defending his record, he said, “During my president-ship, the number of MLAs went to 27 from 4 in the state assembly. In the legislative council, we had zero, now we have six members.”
Ever since the break-up of the grand alliance, eight Cabinet ranks, previously occupied by Congress leaders have fallen empty and sources claim that party legislators are being enticed with these positions in the government. Sources further pointed that the CLP leader has also been promised a Cabinet rank and a ticket to his son from his constituency.

“Singh has been told that he would be inducted in the legislative council and then made a minister. Once he resigns, his son would be given the ticket from his seat. Several other legislators have also been promised prominent positions if they quit to join Congress,” said a Congress leader. Even Singh is likely to be replaced in the next few days.
He went on to add that there is a feeling among these legislators that Congress is finished in the state and that to further their political ambitions, they should join JD(U). He also pointed that several party legislators, previously with JD(U), who contested on Congress tickets, are ready to switch sides once the rebel group reaches the desired number of 18. These MLAs also feel that recontesting elections could be far trickier and they might even lose their seat which has prevented them from taking the bait.

Meanwhile, reports claim that Choudhary was unhappy for not being invited for these meetings which could also be a sign of him losing favour with the central leadership. Choudhary had earlier defied the central leadership when he along with his supporters did not turn up at Lalu Prasad Yadav’s Opposition rally in Patna.
Earlier, party president Sonia Gandhi and other senior leaders including Ahmed Patel and Ghulam Nabi Azad had a detailed meeting with Choudhary and the CLP leader to prevent any desertions from the party. During the meeting they were informed by the Congress President that the alliance with Lalu will continue since the RJD boss is crucial to Opposition unity.

A section of the state leadership believes that the alliance with Lalu is hurting the party’s interests largely because of plethora of corruption cases against Lalu and his family. They also feel that the alliance has alienated the Congress from other dominant castes who have been against Lalu.

“In fact, this also came up during the discussions with Rahul and he has not yet made his stand clear. The alliance has become a bone of contention for many legislators who feel they might not win the next elections as people are accusing Congress of favouring corruption,” said a party leader. This is also the reason why some of the legislators are willing to switch sides.

In another development, Rahul Gandhi also met Himachal Pradesh Congress Committee chief Sukhwinder Sukhu and the party’s in-charge for the state Sushil Kumar Shinde. This indicates that the party is unlikely to replace Sukhu, which is reportedly a demand by Himachal Pradesh Chief Minister Virbhadra Singh.( With Agency inputs )