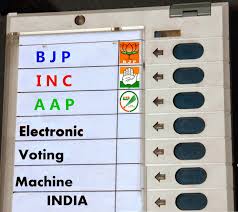 NEW DELHI : In a big setback to Congress, the Supreme Court on Thursday refused to stay the exercise of NOTA (none of the above) option in the Gujarat Rajya Sabha elections scheduled to take place on 8 August.
A bench headed by justice Dipak Misra issued a notice to the Election Commission (EC) and sought its response within two weeks. He further said that the issue would be heard as a constitutional question whether NOTA would apply to election of council of states. Kapil Sibal, counsel for Gujarat Congress, urged the court to stay the elections and said, “If the elections aren’t stayed, it will be a recipe for corruption.”
The court also raised the question of why it had not been challenged despite being in operation since 2014.“The Supreme Court ruling was restricted to direct elections, while this is a case of indirect election on proportional representative by means of single transferable vote. Both are entirely different,” submitted Sibal.He added that NOTA has not been exercised in a single election till now.

The court was hearing a plea by the Gujarat Congress against using the option of NOTA in the Rajya Sabha polls in Gujarat. The matter was sought to be given an urgent hearing on the grounds that there was no statutory provision for the NOTA option in the ballot paper for these elections.

The apex court, however, agreed to examine constitutional validity of EC’s notification to give an option of NOTA in elections. The Congress had on August 1 moved the EC and demanded that the provision of NOTA should not be made in the ballot papers for the August 08 Rajya Sabha elections as it would render the system of proportional representation “nugatory and otiose” – or render it inconsequential.

The party said that use of NOTA option during the Rajya Sabha elections was contrary to the mandate of the Constitution, the Representation of People’s Act, the conduct of election rules as also judgements of the Supreme Court. The EC has, however, said the panel had made it clear in its communications following a Supreme Court judgement of 2013 that NOTA option would be applicable in the Rajya Sabha elections.
The BJP also met the Election Commission over the removal of NOTA or `None of the Above` option for voters in the Rajya Sabha elections.The BJP has fielded its national president Amit Shah, Union minister Smriti Irani and Balwantsinh Rajput for the three Rajya Sabha seats from Gujarat against the lone Congress candidate Ahmed Patel.
Chief whip of the Congress in the Gujarat Assembly Shailesh Manubhai Parmar in his petition has sought to quash of the August 01 circular issued by the secretary of the Assembly. The circular has stated that the NOTA option would be made applicable in the Upper House elections.

The petition has alleged that use of the option would be violative of the provisions of the Representation of People’s Act, 1951 and the Conduct of Election Rules, 1961. “Without a corresponding amendment to the Act and the Rules any purported administrative action of the Election Commission of India to introduce NOTA is ex-facie illegal, arbitrary and in fact tainted with malafide,” it claimed.

The petition alleged that the ECI, which despite being the constitutional watchdog for ensuring free and fair elections, “has become a tool in the hands of the ruling dispensation to facilitate violation of the provisions of the Constitution, the Act and the Rules”.

It said the All India Congress Committee (AICC) had made a representation before the ECI “highlighting the illegal nature of the circulars” and requesting the poll panel to refrain from implementing the same to ensure free and fair elections, but the state Assembly issued a circular making available the NOTA choice.
(With Agency inputs)